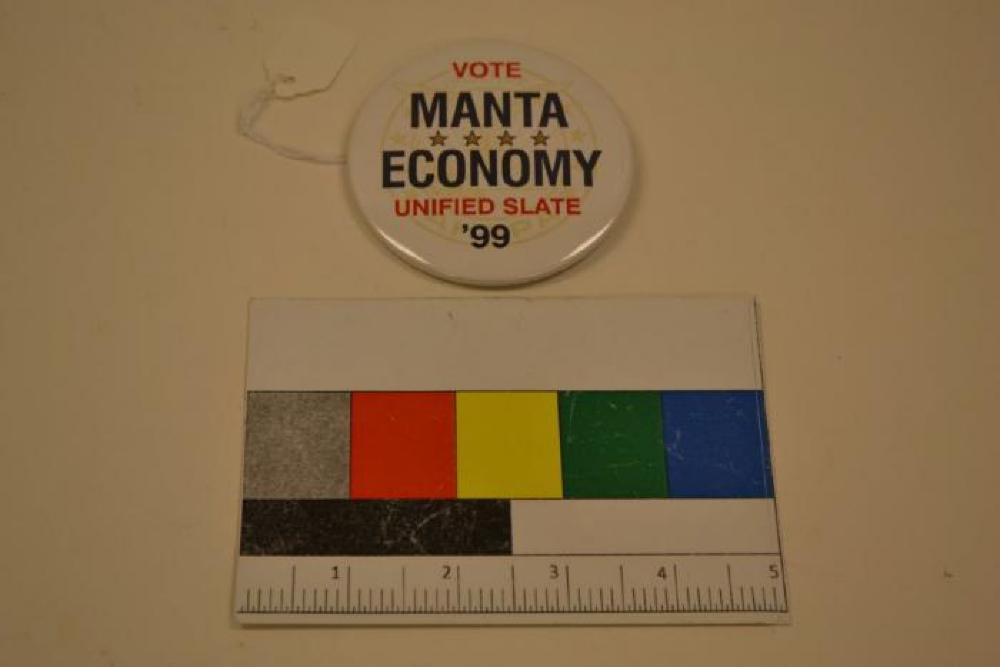 This is a campaign button for the Order of AHEPA, 1999. It is white with a water marked background of the AHEPA crest. The watermark of the crest is gold. In large writing are the words, "VOTE MANTA - ECONOMY UNIFIED SLATE '99". "Vote" and "Unified Slate" are in red text, while "Manta", "Economy", and "'99" are in navy blue/black writing. The back is a metallic silver, with a pin.

This is believed to be the campaign pin for Steve A. Manta who held both the Supreme Vice President and Supreme President positions during his time in AHEPA. The American Hellenic Educational Progressive Association (AHEPA) is the largest and oldest American-based, Greek heritage grassroots membership organization. Its scope is international with chapters in the United States, Canada, Greece, and Cyprus, and "sister" chapters in Australia and New Zealand under the auspices of AHEPA Australasia. AHEPA was founded on July 26, 1922 in response to the evils of bigotry and racism that emerged in early 20th century American society. It also helped Greek immigrants assimilate into society. Today, AHEPA brings the ideals of ancient Greece, which includes philanthropy, education, civic responsibility, and family and individual excellence to the community. Although a majority of the membership is composed of Americans of Greek descent, application for membership is open to anyone who believes in the mission of the organization.