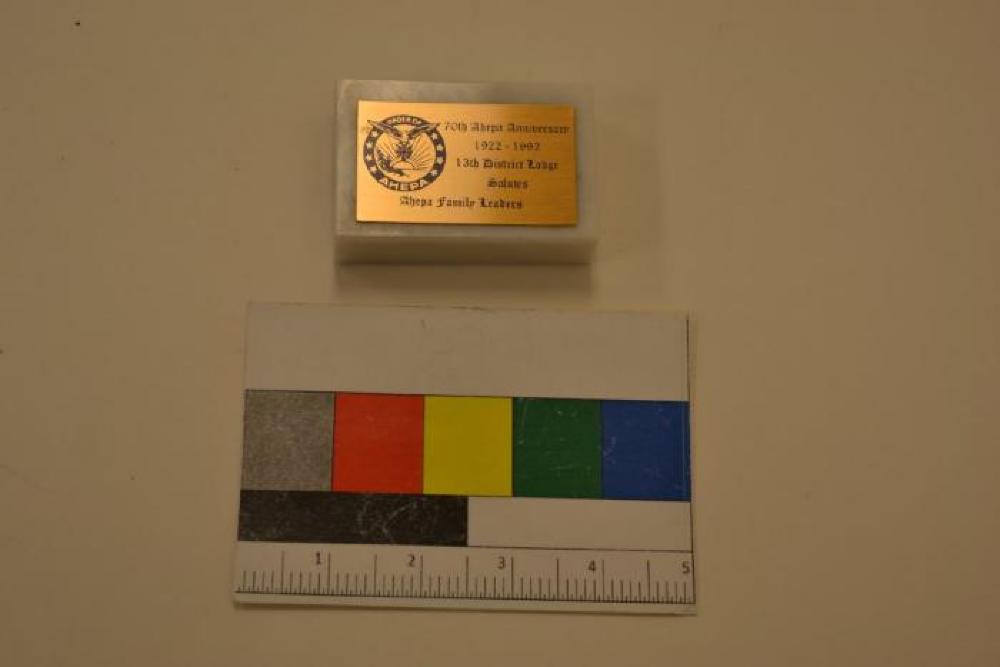 Masters, Peter (is related to)

AHEPA paperweight commemorating 70th anniversary 1922-1992. The majority of the paperweight (the main block portion) is made out of white marble. On the top of the marble paperweight is a small golden/brass plate that is printed with blue writing. On the plate, to the left, is the fraternal emblem of AHEPA. On the right reads the following text, "70th AHEPA Anniversary, 1922-1992, 13th District Lodge Salutes AHEPA Family Leaders". The paperweight is enclosed in a plastic wrap and is additionally protected by a small white box.

The 13th District is comprised of IL, WI, and parts of MO. The American Hellenic Educational Progressive Association (AHEPA) is the largest and oldest American-based, Greek heritage grassroots membership organization. Its scope is international with chapters in the United States, Canada, Greece, and Cyprus, and "sister" chapters in Australia and New Zealand under the auspices of AHEPA Australasia. AHEPA was founded on July 26, 1922 in response to the evils of bigotry and racism that emerged in early 20th century American society. It also helped Greek immigrants assimilate into society. Today, AHEPA brings the ideals of ancient Greece, which includes philanthropy, education, civic responsibility, and family and individual excellence to the community.