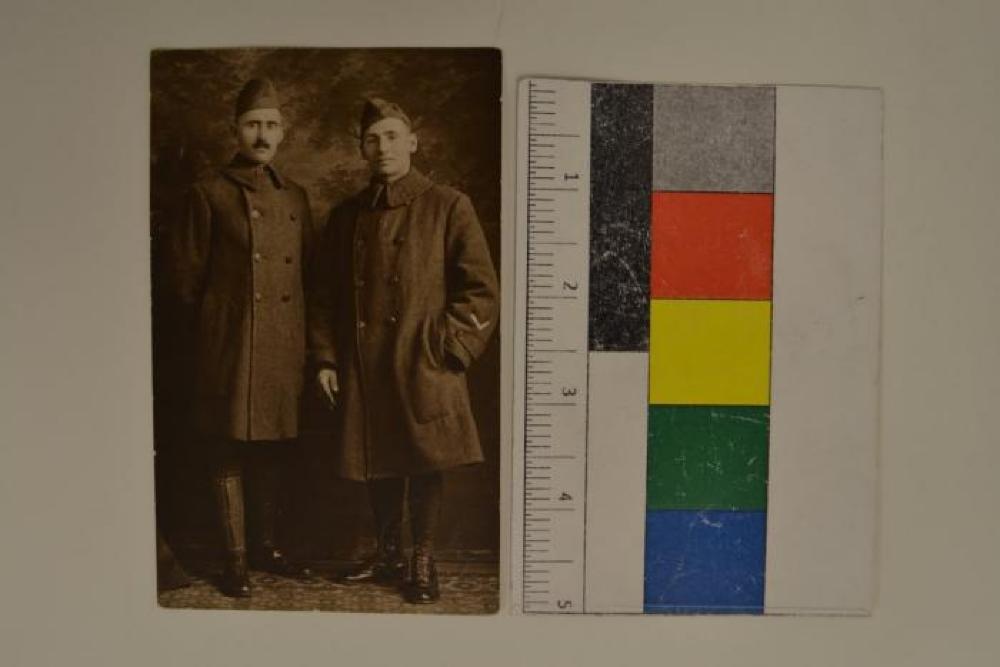 The portrait is taken indoors, standing in front of a mural backdrop of trees. Both men are wearing Army-issued winter wool overcoats; double-breasted with six buttons and a wide collar.

The man on the left is taller than the man on the right. He wears canvas puttees or leggings over the shin of his trousers and a narrow, center-fold garrison hat. His eyes are set deep and framed by dark eyebrows.  A thick dark mustache rests above is upper lip. His hands are clasped behind his back.

The man on the right wears wrapped puttees or leggings and a center-fold garrison cap. His bronze service branch insignia is visible on the up-turned left side of the cap. He has one hand in his left pocket and the other at his side.

The two men are turned slightly toward each other but looking directly at the camera with solemn expression. Each has one foot pointed inward and the other pointed at the camera. The wall behind them is painted or wallpapered with naturalistic trees and patterned wainscoting at the bottom. The carpet is light-colored with a dark lattice pattern.

The photograph is printed on a postcard. In the bottom right corner, there is a 1-inch diameter embossed circle with the letters "Bloom---" at the bottom.

George Phillos was born in 1893 in Greece. He served in the U.S. Army during World War I, and afterward joined the American Legion in Bloomington, IL. The American Legion was formed in 1918 to serve the need of soldiers as they returned to civilian life. Its mission was "...to foster and perpetuate a one hundred per cent Americanism; to preserve the memories and incidents of our association in the Great War..." U.S. Army uniforms changed quite a bit over the 20th century. By 1917, the Army recognized the importance of camoflage and issued uniforms in khaki or olive drab. Not much is known about George Phillos' life and military career, but his uniform does give some clues. The chevron insignia on the left sleeve of his overcoat is the enlisted rank of a Corporal (one rank above Private). Phillos is wearing an "overseas cap," worn by doughboys in the trenches in France. The standard "Montana peak" hat (worn by Phillos in 1998.22.2) was impractical in the trenches, because troops had nowhere to store them when they were issued their steel "Brodie" helmets. The foldable overseas (garrison) cap could be carried in their pocket or pack. At the beginning of World War I, soldiers wore wool/felt hats into combat, totally unprepared for modern weapons. The wide bowl-shaped "Brodie" helmet was first introduced in France in1915 as a response to the devastating number of head wounds from explosions and shrapnel. As more American troops were sent to France, many of the "Montana peak" hats were recycled to make felt slippers for wounded soldiers. Styles of garrison caps varied. Some had upturned "curtain" sides while others had a center seam at the top. Enlisted men wore the bronze disk of the service branch sewn into the left curtain of their caps. Phillos is also wearing wrap "puttees" that cover the lower part of his legs from the ankle to the knee. These puttees consisted of a long narrow piece of cloth wound tightly round the leg to provide both support and protection. The wrap puttees could withstand trench mud better than canvas puttees (like the ones worn by the man on the left in this photograph). In World War I, the Army began using puttees with ankle boots instead of knee-high boots in order to conserve leather. According to the 1940 Census, George Phillos lived at that time with his sister and brother-in-law, Harry and Catherine Secaras and their children, John and Helen, in Chicago. His nephew, John Secaras, donated this photograph postcard to the National Hellenic Museum along with his Army uniform. Photograph postcards were invented by Kodak in 1903. The No. 3A Folding Pocket Kodak camera was designed for postcard-size film and allowed people to take photographs and have them printed on postcard backs. In 1907, Kodak created a service called “Real Photo postcards” enabling people to make a postcard from any picture they took. That same year the U.S. Postal Service began allowing written messages on the back of penny postcards in addition to the address. This postcard has space for "correspondence" and "address" on the back. Later, a vertical line was added splitting postcard backs in half, with space for the message on the left and the address on the right. "Real Photo" postcards soared in popularity in America, and many people began collecting the cards in albums. No other format has provided such a massive photo history of America, particularly small-town and rural America where photography was often a luxury.