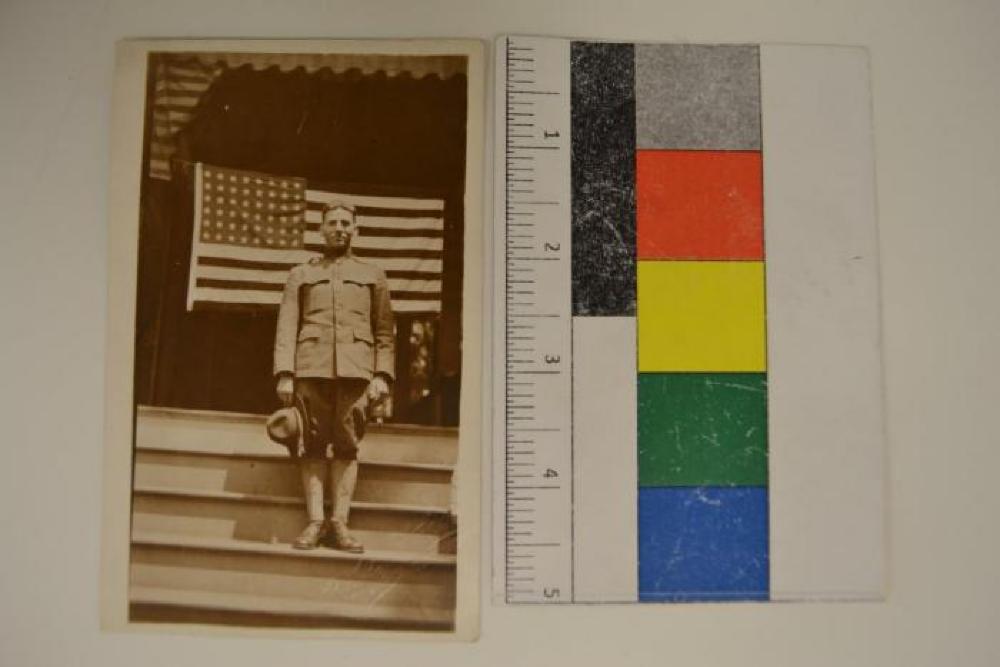 Studio, Star (is related to)
Phillos, George (owned by)
Secaras, John (collected by)

Black and white photograph of George Phillos standing slightly off-center on stairs leading down from a stage. Four stairs are visible and Phillos stands, facing the camera with heels together and toes apart, on the second stair from the bottom. Behind him on the stage, an American flag is suspended flat so the whole flag is visible. There is striped bunting and a scalloped curtain above the stage. Phillos has a slight smile. He is wearing an Army uniform-- a button-down jacket, tapered trousers, boots and canvas puttees. He is holds his "Montana peak" campaign hat at his right side (image's left). The photograph is printed on a postcard. In the bottom right corner, it is embossed with a diagonal stamp that reads "The Star Studio" in elegant font and "BLOOMINGTON" in block print below.

George Phillos was born in 1893 in Greece. He served in the U.S. Army during World War I, and afterward joined the American Legion. According to the 1940 Census, he lived at that time with his sister and brother-in-law, Harry and Catherine Secaras and their children John and Helen in Chicago. George Phillos' nephew, John Secaras, donated this photograph to the National Hellenic Museum along with his Army uniform. In this photograph, Phillos is wearing an Army enlisted uniform with button-down jacket, tapered trousers, ankle boots, and canvas puttees. He is holding a "Montana peak" campaign hat. The stage behind him appears to be decorated for some sort of ceremony. It might have been Phillos' basic training graduation ceremony. The photograph is printed on a memento postcard. Photograph postcards were invented by Kodak in 1903. The No. 3A Folding Pocket Kodak camera was designed for postcard-size film and allowed people to take photographs and have them printed on postcard backs. In 1907, Kodak created a service called “Real Photo postcards” enabling people to make a postcard from any picture they took. That same year the U.S. Postal Service began allowing written messages on the back of penny postcards in addition to the address. This postcard has space for "correspondence" and "address" on the back. Later, a vertical line was added splitting postcard backs in half, with space for the message on the left and the address on the right. "Real Photo" postcards soared in popularity in America, and many people began collecting the cards in albums. No other format has provided such a massive photo history of America, particularly small-town and rural America where photography was often a luxury.