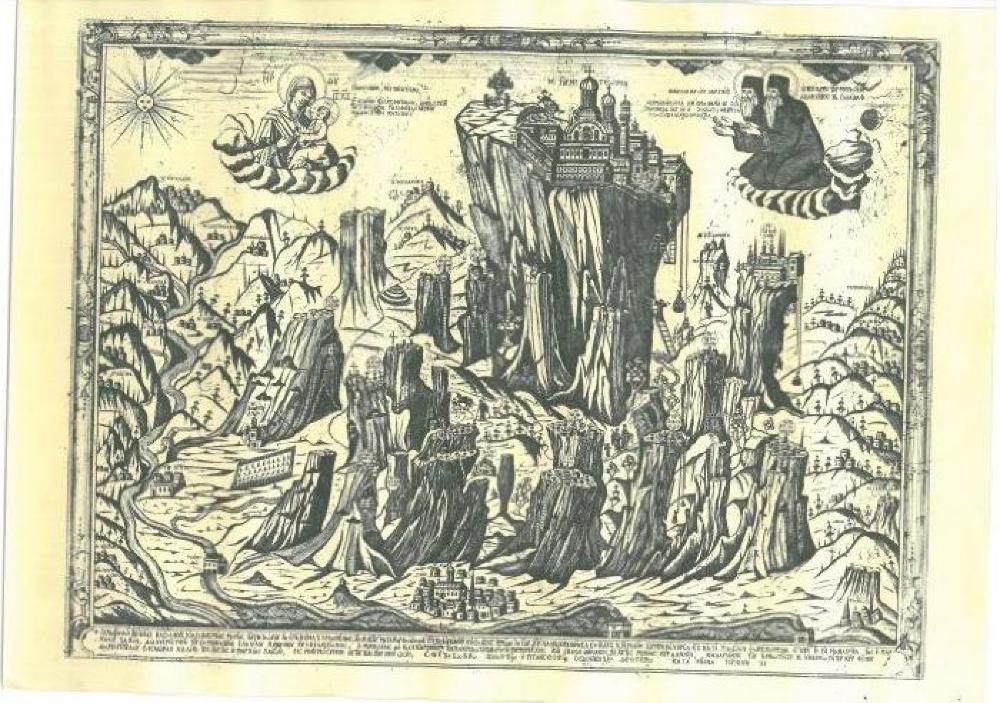 Nicholas Topping Collection (is part of)

Topping, Nicholas (is related to)

This is a scrolled map of the region of Meteora. The whole image is aurrounded by a border. At the top left of the scroll is the sun. To the right of the sun are two figures on a cloud, one larger, who seems to be holding the other figure, who is smaller. The larger figure is presumed to be the Virgin Mary, and that she is bestowing a blessing upon the population of Meteora. To the right of the two figures on a cloud, is the main monastery of Meteora. This monastery is the largest and main figure featured on this map. To the right of the monastery is another cloud with two figures atop it. They are presumed to be the founders, being the king's son at the time (1388) and the hermit Ioasaf, a pupil of Athanasios. They are replying to the Virgin Mary for continued grace/protection/etc. The bottom half of the map is comprised of more rock pinnacles, all smaller than the one that is holding the main monastery. A large number of structures, that all seem to have a small cross atop them are labeled with Greek labels. This are assumed to be monasteries, and the little word bubbles with Greek text are the labels of the names of the monasteries. Some are located in the hill region around the rock structures, and some are located on top of the rock structures, similar to the main monastery, just on a smaller scale. There are a few people also located around these monasteries, just walking, or some attempting to get to these monasteries, by means of ropes, ladders, and baskets. Bottom inscription says something to the effect that this is a memorial/commemorative copper etching of the founding of Meteora someone else and somebody from Haliki(?) blah blah blah the date of our lord 1782 June 21. This is thought to be written in Byzantine script, so the translation was slightly difficult, but what was translated, is thought to be pretty accurate. This is an extremely detailed map/picture that is believed to be possibly handed out or published by the church. Year is unknown.

Meteora, meaning "suspended in the air" in Greek, is a place of many monasteries built upon rock pinnacles in the region of Thessaly, next to the small town of Kalambaka. It was believed that hermits and ascetics began to reside there by the 11th century. Around the 14th century, with the threat of Turkish invasion throughout Greece, monasteries and those a part of the Meteroa community built a series of monasteries atop these rock pinnacles as a use of safe religious refuge. At the height of the community, around the 15th century, there were a total of 24 monasteries located atop these rock fixtures. It is listed as the second most important complexes of Eastern Orthodox monasteries, second only to Mount Athos. Until the 17th century, the main way to arrive at these monasteries was the use of ropes, ladders, and baskets. Tourism has depleted the secluded nature of the remaining 6 monasteries, but is essential to their survival. This map comes from the shop, Topping and Co. International House, owned by Nicholas Topping, in Milwaukee, Wisconsin. A son of Greek immigrant parents, Nick was born Nick Topitzes, but anglicized his name at the age of 18 to avoid the rampant ethnic discrimination facing Greeks at the time. Nick received degrees in history and communications from University of Wisconsin, Madison, and was drafted into the Army for WWII, working counterintelligence in the Mediterranean. Returning from the war, he opened up Topping and Co. in order to supply the people of Milwaukee with imported food and goods from the Eastern Mediterranean and Near East along with books and music from all over the world. Nick is known in modern Milwaukee history as a soldier for peace and social justice and also a music impresario, who worked to bring ethnic and folk music to Milwaukee, including The Beatles.