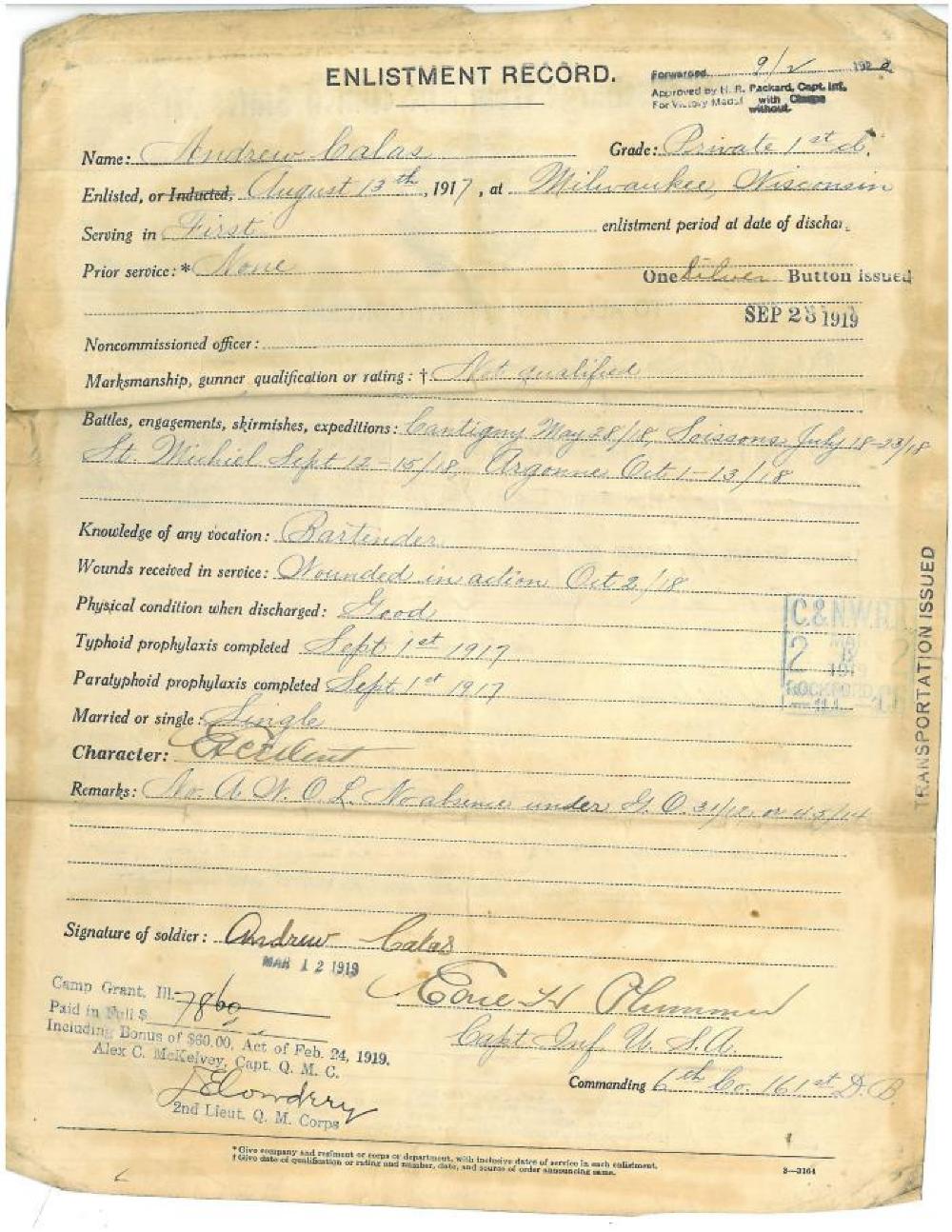 Calas Family Collection (is part of)

An honorable discharge document for Andrew Calas. The document has a faded yellowing border and is stained, crumpled and ripped. The front has lines of dirt over it. It is typed with dashed lines on which officials wrote Calas' information. the front is stamped with an almost impossible to read blue Wisconsin stamp and the back is stamped with a Rockford, Illinois stamp. The front of the document says "Honorable Discharge from the United States Army," and has the U.S. crest with an eagle holding a branch and arrows.

A certificate of honorable discharge for Andrew Calas on March 21, 1919. On the back Calas' enlistment record has him as a Private 1st class. He was enlisted August 13th, 1917 at Milwaukee, Wisconsin. He was serving in his first enlistment period when he was discharged. One silver button was issued to him. He was not in markmanship or a gunner and was not qualified nor was he rated. He worked as a bartender before his enlistment. The battles he was in included were: The battle of Cantigny on May 28/18, the battle of Soisssons, July 18-23/18, the battle of St. Mihiel, September 12-15/18 and the battle of Argonne, October 1-13/18. He was wounded in action October 2, 1918 but was in good physical condition when he was discharged. He had gotten his typhoid and paratyphoid prophylaxis completed September 1, 1917. On October 1st the First Army of Argonne offensive was put to a halt by German resistance and traffic jams. For the next few days veteran divisions relieved the green center division. During this time there was bone-chilling rain which turned the roads to mud and started massive outbreaks of influenza. It was during this time that Andrew Calas was injured perhaps by an attack of mustard gas. Mustard gas or sulfer mustards are cytotxic and vesicant warfare agents that cause blistering on exposed skin and in the lungs. German scientists developed the ability for widespread mustard gas use for the German army in 1916. Calas was recorded as single, his character was recorded as "Excellent," and he signed his name at the bottom. The bottom is signed by the Capt. Inf. of the U.S. army who commanded the 6th Commanding Officer, 161st Brigade. Perhaps a Depot Brigade. The page is stamped with 78.60$ paid in full from Alex C. Mckelvey, Capt. Quatermaster Corps. and signed by the 2nd Lieut. Quatermaster Corps. The front of the certiciate certifies that Andrew Calas is honorably discharged. His serial number is 284377 and he is a Private 1st without an assigned infantry (though his last infantry was the 28th). He was honorably discharged for the convenience of the government by the reasons of a comanding officer. Andrew Calas was born in Crete, Greece and was enlisted when he was 24. At the time, he had gray eyes, black hair, a dark complexion and was 5 feet 41/2 inches in height. The document was signed by James A. Walnath, Major Infantry, U.S.A.