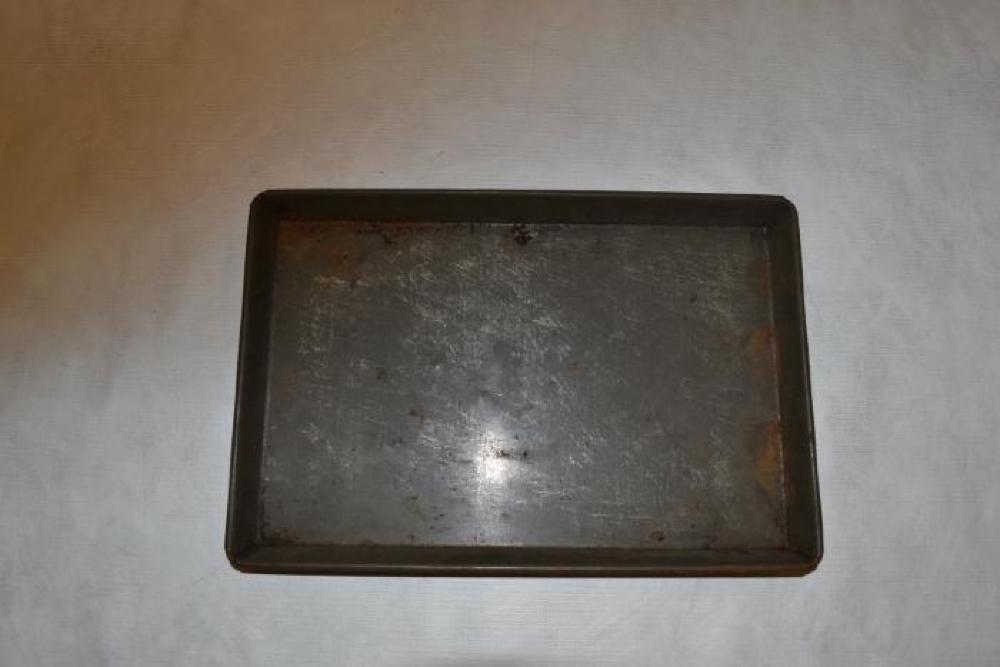 This is a smaller sized baking pan with lipped edges along all four sides. The pan has obviously been used quite a bit because there are scratches on the flat surface from spatulas. The pan is also quite rusty in manu areas because it is made of metal, most likely tin. None of the rust spots have eaten all the way through the pan but on the bottom of the pan they are deeper than the ones on the inside. The rust is an orange color with a black outline in certain places.

Paulina Franks' grandfather, John Rassogianis, came to Chicago in the 1890s. He began his life in the new city by peddling fruits and later, with the help of his sons Alex and George, would open a candy store. In the 1920s Paulina Franks' father Constantine became a part of the family business and the store was able to prosper. When the second business closed Paulina Rassogianis chose to hold as many of the candy store's items as possible and, later, donate them to the National Hellenic Museum. The Rassogianis family began their candy business in Chicago proper, working out of their own shop named "St. Louis Ice Cream Parlor." Eventually, the shop was closed and the Rassogianis' chose to continue their candy store venture in Berwyn, Illinois. The new shop they chose to open was named Alex's Sweet Shop. Paulina Franks' father was a key contributor to the success of the Rassogianis candy stores. While Constantine Rassogianis was a noteworthy entrepeneur, he also had many other accomplishments. Among these was his four years of involvment in the Greek national military during World War I wherein he obtained the rank of sergeant. Also, he was a published author and poet, an experienced mandolin player, a church officer and had extensive knowledge of psalti. These pans, like all bakeware can be made of a variety of materials, but are primarily aluminum or stainless steel. The most basic sheet pan is literally a sheet of metal. Before routine use of metals, large tough leaves or hollow gourds, frequently soaked in water, were used to protect foods from direct heat when cooking on a fire. Common additional features that may be found in sheet pans include a lip on one or more edges to prevent food from sliding off, handles to aid in placing the pan into the oven, and removing it again, or a layer of insulation or air (air bake pan) designed to protect delicate food from burning. Although sheet pans are widely used and manufactured, there is no possible way to pin down the first use, or the creator of, the metal baking sheet since it came into use in many places and by many people before recorded history.