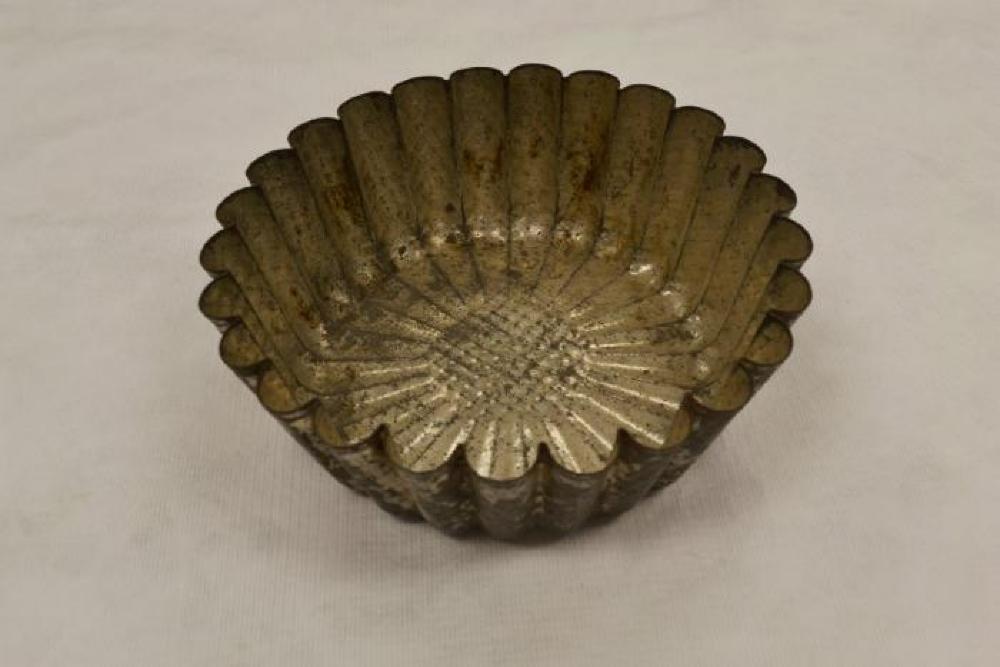 This larger cake mold is in the shape of a sunflower. On the interior there is the anther, or center of the flower, and to make it there are little circles in a grid-like pattern. Extending from the anther are the petals which extend all the way to the very edge of the mold. On the sides of the mold the effect is a scalloped design with round curves. On the exterior of the petals at the very edge there is a little lip where the metal was bent outward a little to create the edge. The entire this is made of metal, most likely tin, and is silver in color. In most of the creases or protrusions the color is a darker silver due to wear and rubbing on things. There are some areas with rust , mostly in the petal indentations on the interior. The base also has quite a bit of rust from sitting on things. The petals on the sides on the outside of the tin are also darker having corroded away from handling, but most have not begun rusting yet.

Paulina Franks' grandfather, John Rassogianis, came to Chicago in the 1890s. He began his life in the new city by peddling fruits and later, with the help of his sons Alex and George, would open a candy store. In the 1920s Paulina Franks' father Constantine became a part of the family business and the store was able to prosper. When the second business closed Paulina Rassogianis chose to hold as many of the candy store's items as possible and, later, donate them to the National Hellenic Museum. The Rassogianis family began their candy business in Chicago proper, working out of their own shop named "St. Louis Ice Cream Parlor." Eventually, the shop was closed and the Rassogianis' chose to continue their candy store venture in Berwyn, Illinois. The new shop they chose to open was named Alex's Sweet Shop. Paulina Franks' father was a key contributor to the success of the Rassogianis candy stores. While Constantine Rassogianis was a noteworthy entrepeneur, he also had many other accomplishments. Among these was his four years of involvment in the Greek national military during World War I wherein he obtained the rank of sergeant. Also, he was a published author and poet, an experienced mandolin player, a church officer and had extensive knowledge of psalti. Cake molds have a long history. The Bronze Age arts gave mankind his earliest experience with molds for imprinting, decorating, and casting. The oldest evidence of sweet cakes (cookies) was found in the Indus Valley dating back to 2500 B.C. The Greeks also played a part by teaching baking to the Romans and by 200 B.C., honey cakes were baked as well as breads. In Ancient Rome, clay plaques were in abundance and used to impress negative images into honey cakes, medications, wax, clay, etc. The detailed carvings of wooden molds well served those who shaped wax and dough for the church and royalty. Supposedly, the Germanic tribes pressed out picture cakes during the annual celebration of Winter Solstice to offer as sacrificial gifts to Wotan, King of Nordic gods. In the 15th and 16th centuries artisans capable of carving complex woodcuts and engravings abounded in central Europe. They had the knowledge of tools and woods to accomplish exquisitely detailed carvings (including molds). Such artisans were often enlisted by royals to design and carve gingerbread cake molds that at times were used as propaganda. Because of this royalty often supported the arts, including making gingerbread and carving elaborate molds. Cookie Molds reached their glory during the early part of the 17th Century. The molds were highly prized as heirlooms, and were handed down through the centuries - from mother to daughter as a treasured part of her dowry, or as the jealously guarded repertoire of the Gingerbread Bakers' Guild. As a result cookie molds offer a rare glimpse into the popular culture of the time. Like the greeting cards now, "cookie messages" announced births and weddings; commemorated important holidays; and reflected local news, characters, politics, proverbs, jokes, folk tales and - of course - love messages. In the 18th and 19th centuries the mass production of bakery cookies for the common man required carvers to include more images in one piece of wood used as a mold for springerle, marzipan and tragacanth. This push for mass production soon included more efficient work procedures in bakeries and a German baker discovered that a cutting insert of tin would greatly speed production (and profits) so metal cookie cutters began to be used as the baker's secret tool. During the 19th and 20th centuries the artistic quality of carved molds declined since they were then carved by the bakers themselves or by amateurs because most geographical areas no longer had professional form cutters. The molds being carved lacked imagination, stressed strict symmetry and ornamentation as old and fashionable designs were poorly copied many times over. . The purpose of cake molds made in fun or functional shapes is to help make specialty cakes. Cake molds are especially popular for kids' birthday cakes or for various holidays. They are designed to make it easier to bake and decorate a complex cake without having to do all of the shaping and designing yourself. Generally, a cake mold is made out of metal or silicone. Silicone can be helpful because it bends more easily, making it easier to remove the cake from the pan without damaging it. They are generally fairly inexpensive and last a long time. But metal was used for quite a while before silicone was introduced. Copper molds were the preference of well-heeled cooks; while tin molds in shapes with names like Solomon's Temple were found in humbler kitchens. Tin was more versatile, however. Madelines, teacakes, and petit fours were baked in small, stamped-tin "patty pans," while tinned molds with removable sides were used for raised pies. This larger tin mold was most likely used for the larger cakes, and not a combination of small cakes or moldable candy.