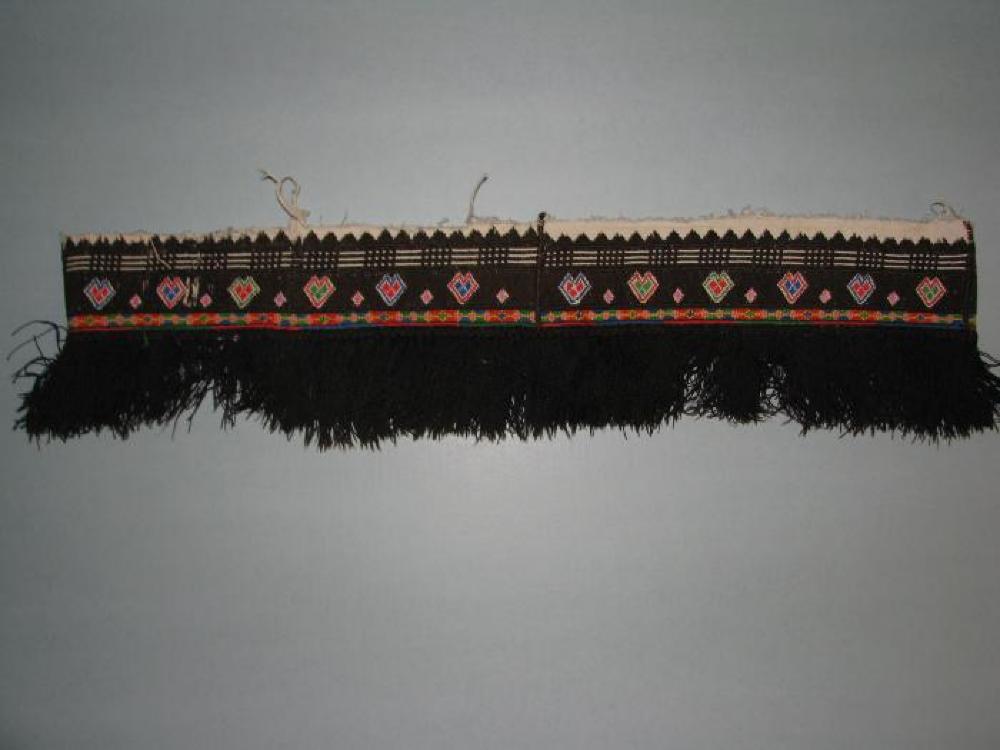 Decorative belt. Four sections of fabric sewn together, brown stiching with colored "hearts" in shades of red, blue and green. Pink diamond shape accents. Brown thread fringe. The belt is made up of four panels that repeat the same pattern. The pattern is a white at the top and brown and white alternating triangles. There is a brown background for most the of the belt. Near the top is a strip of brown with a white pattern within. The pattern is alternating square shaped dots and lines. One square is made up of white twelve dots. The other square is made of three white lines. The next section is alternating white hearts and diamonds. The hearts are alternating colors. The first heart is outlined in blue yarn with three red diamonds, the next heart is outlined in red yarn with three green diamonds, the next heart is outlined in green with three red hearts, then a heart outlined in red with blue diamonds, then the blue/red heart, followed by the red/green heart. A small pink diamond outlined in white is in between each heart. At the bottom of the belt there is a line of a colorful, geomatical design. In the middle of the line there string of yellow with circles throughout, each circle has a yellow line on top of the circle and below. The circles are filled with alternating colors of pink, green, and blue. The little squares created by the yellow yarn are filled with alternating colors of red, blue, and green. The bottom of the belt is lined with one string with the colors red, blue and green. The bottom of the belt has brown fringe that is almost the same lenght as the body of the belt. In between each panel is a thick line of brown string. The top of the belt is beginning to fray. The inside of the belt is the back sitching from the front side.

The donor lived in Greece from 1965-1982 and wore and owned the Sarakatsani costume. This belt came from the Sarakatsani people. Sarakatsani are indigenous people from Greek. They are nomatic people who live half the year in the mountains. Their art (song, pottery, dance, clothing design) resembles the geometric art of pre-classical Greece. Furthermore, Sarakatsani still practice traditional folk medicine. They are Greek Orthodox Christians and associate with Church of Greece. They begin their migration up the mountains on Saint George Day in April and return to the low plains on Saint Demetrius in October. Sarakatsanies have lived in countries surrounding Greece (Bulgaria, Albania, Republic of Macedonia). However, now there are only measurable numbers of people in Greece and Bulgaria. For women's outfits there are thirteen parts. Most items are made from hand-wooven wool. The belt is called zonee (or zoni). The bottom of the belt is larger than the top so that it has a cone shape and connects at the side. There have been significant decreases in the population of Sarakatsani due to urbanization. Many have willing left; however, others have left because there is not enough open land to support their lifestyle.