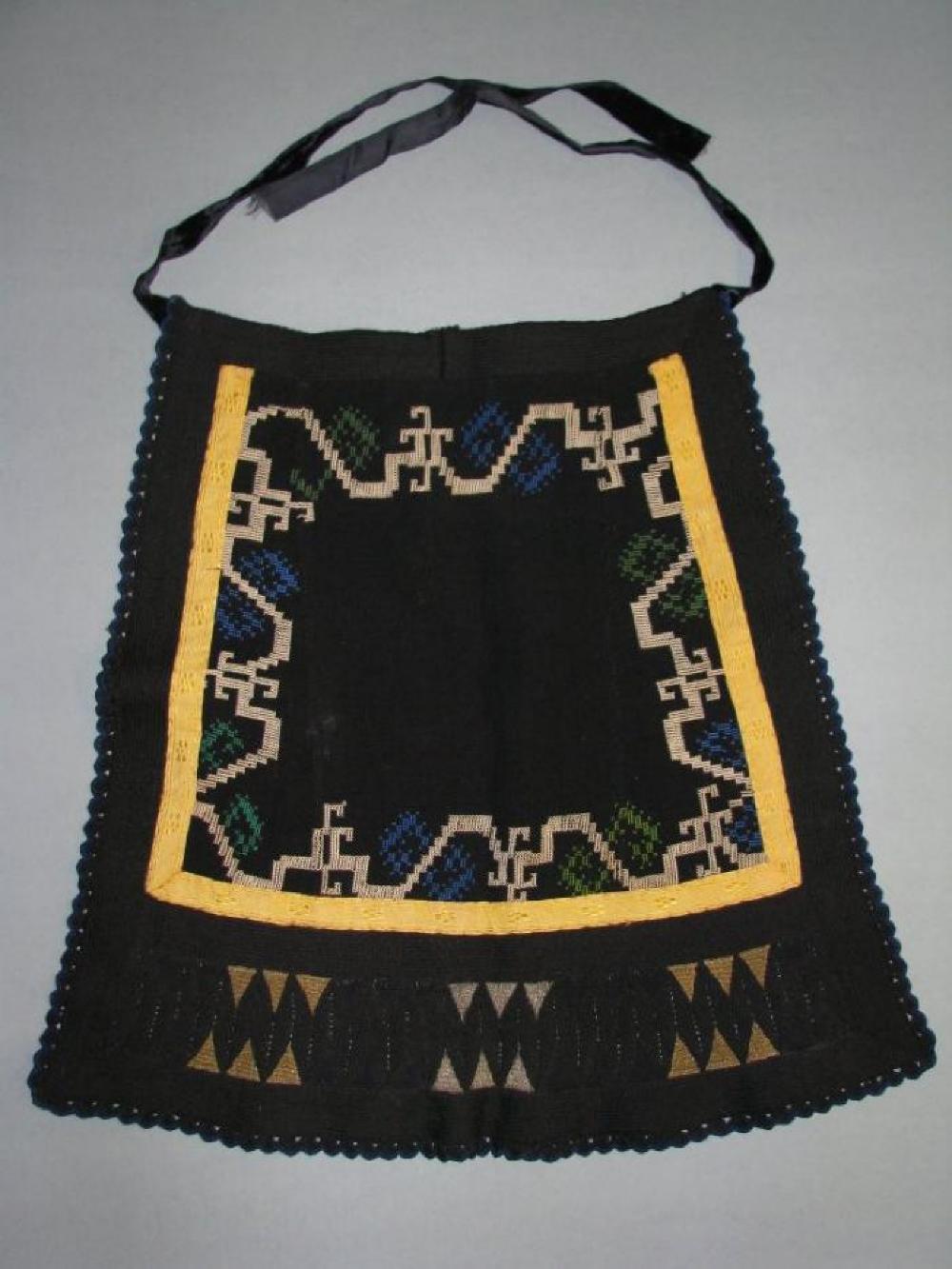 Black linen apron, heavy stitched black edge with royal blue edging at scalloped detail. Yellow ribbon boarder, cream, royal and spring green cross stitch detailing along ribbon. Navy velvet ribbon ties. Three panels of base linen fabric sewn together. Around the edge of the apron there are strings of thick black yarn that creates a boarder that is about an inch wide. Except for the top, the three sides have scalloped edging with a single blue thread lining the top. Except for the top, there is a gold ribbon that boarders the black boarder. Within the gold ribbon there is a pattern. The pattern is a flower made from seven circles with a line pattern in between each flower. There is different line pattern at the top and bottom of the gold ribbon. The patterns are made with white string. Within the gold ribbon there is a large cross sitched boarder. The majority of the boarder is white cross sitching. It goes in an up and down pattern around the boarder. It most peaks and troughs there is a geomatical pattern that is created. The pattern is hook shaped, some go up and others go down. Around the white pattern is alternating green and blue patterns. The green and blue yarn are crossed stiched to form a diamond that is not completely filled in. On the bottom of the apron there is a pattern. The pattern is black zig-zags that form triangles in between the zig-zags. Every three triangles the color that fills them in changes. The colors alternate between navy blue and gold and silver. The apron is tied together with a string of velvet ribbon that come from both ends of the top. The back of the apron is back stiching from the cross sitch.

The donor lived in Greece from 1965-1982 and wore and owned the Sateataski costume. This style of vest came from the Sarakatsani people. Sarakatsani are indigenous people from Greek. They are nomatic people who live half the year in the mountains. Their art (song, pottery, dance, clothing design) resembles the geometric art of pre-classical Greece. Furthermore, Sarakatsani still practice traditional folk medicine. They are Greek Orthodox Christians and associate with Church of Greece. They begin their migration up the mountains on Saint George Day in April and return to the low plains on Saint Demetrius in October. Sarakatsanies have lived in countries surrounding Greece (Bulgaria, Albania, Republic of Macedonia). However, now there are only measurable numbers of people in Greece and Bulgaria. For women's outfits there are thirteen parts. Most items are made from hand-wooven wool. The apron is called podia. The podia is quadrangular shaped due to being wider at the bottom. It is placed above the fustani and under the zonee. It hangs lower so the zonee is visible. Traditionally, it is black wool with decorations added. There have been significant decreases in the population of Sarakatsani due to urbanization. Many have willing left; however, others have left because there is not enough open land to support their lifestyle