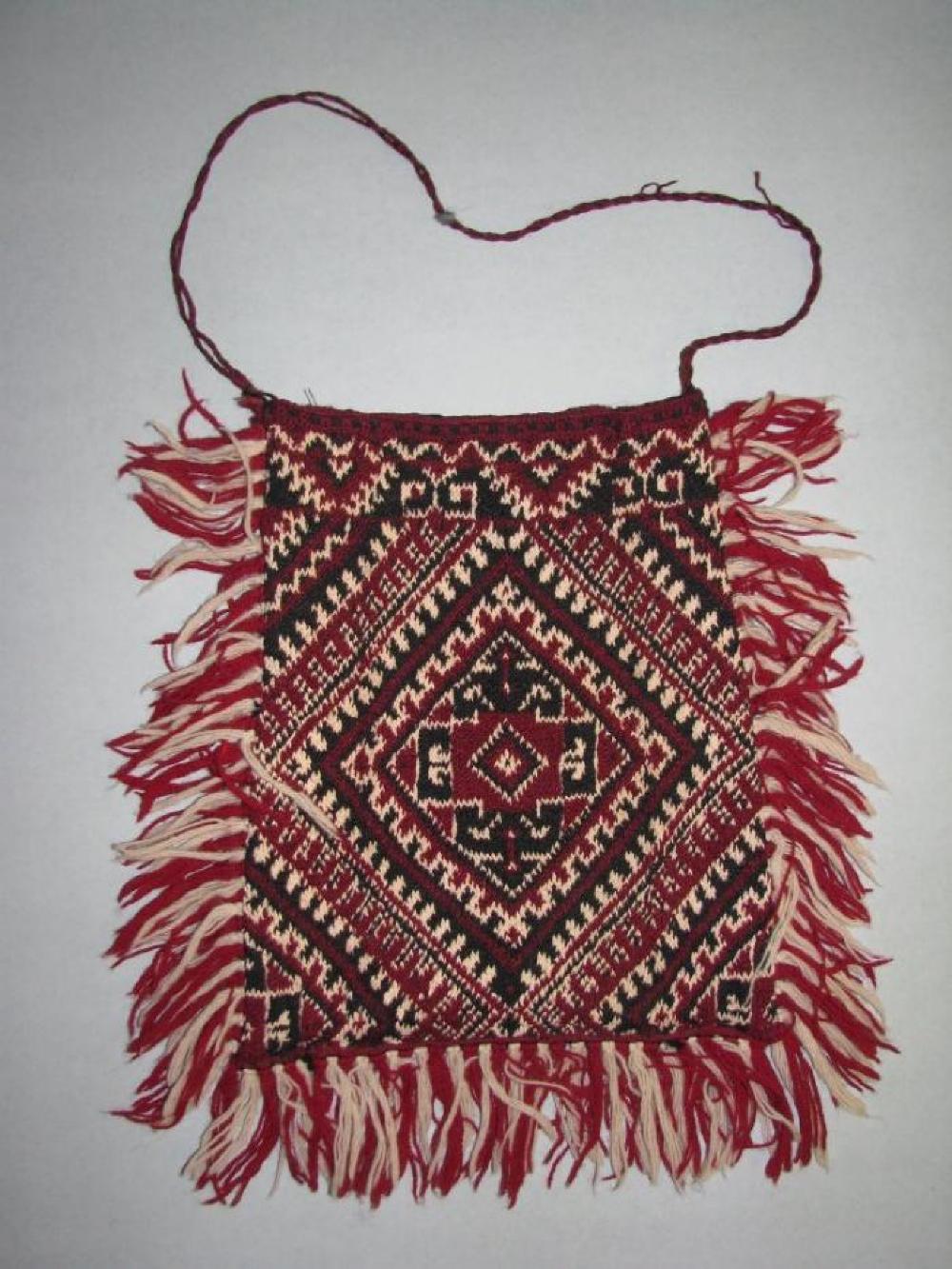 Marroon, black, and cream woven fabric, originally used for legging, with geometric design. Sewn at sides and bottom to form sealed purse. Black nylon fabric lining. Red and white tassles at sides and bottom edges. Twisted string handle. In the center of the purse, is a large diamond. In the center of the diamon is a small diamond outlined in white, then lined in black, then maroon, then white (which is the center of the diamond) and in the middle of the little white diamond there is a black dot. Surrounding the diamond is maroon wool. Off the square of maroon wool are four black rectangles on each of the square that the maroon wool forms. Each black rectangle is outlined in white except at the bottom and the top. On the retangles on the left and right side there are two white 'hooks' in the center. On the rectangles on the top and bottom there is a maroon arrow in the top half of the rectangle. In the maroon arrow there are two white dots at the top and bottom. And two white 'hooks' coming from an angle at the middle and going outwards. The triangle formed between the black rectangle and the outline of the dimond at the top and the bottom is filled in with black and the right and left side is filled in the maroon. Around the white line that forms the diamond is a black line then a maroon line. Then in a dimond shape, the line forms little hills the bottom concaves are filled in with maroon and the top concaves are filled in with black. Then another line of maroon. Then in the diamond shape there is a row of alternating white and black 'prongs.' Then another row of maroon, then a line of white wool, then a black line. Long black 'prongs' are coming out of the black line and little white sitches are coming out of the prongs. The background is maroon. In the corners of the purse it is same for all four cornors. It is a row of alternating black and white 'prongs.' Then a row of maroon. Then there are black prongs that are lined with white on the top. Then another row of maroon that also fill in the gaps created by the prongs. Then a row of black then white that creates two triangles. The triangles are filled with maroon yarn. There are two black rectangles that are at downward angle. There are two white hooks in the black rectangles. Finally, there is a maroon rectangle with a white triangle that is filled with black yarn. The top of the back is a row of maroon then a maroon row with black stiching. Then a row of maroon. The purse strap are two maroon strings with black yarn twisted around each sting. On the right side the two strings connect in a tied ball and is connected to the purse by a thin black string. Around the sides and bottom of the purse is fringe. The fringe is made from white and maroon yarn in alternating patterns. The inside of the purse is lined with black plastic sheet.

The donor lived in Greece from 1965-1982 and wore and owned the Sateataski costume. This style of purse came from the Sarakatsani people. Sarakatsani are indigenous people from Greek. They are nomatic people who live half the year in the mountains. Their art (song, pottery, dance, clothing design) resembles the geometric art of pre-classical Greece. Furthermore, Sarakatsani still practice traditional folk medicine. They are Greek Orthodox Christians and associate with Church of Greece. They begin their migration up the mountains on Saint George Day in April and return to the low plains on Saint Demetrius in October. Sarakatsanies have lived in countries surrounding Greece (Bulgaria, Albania, Republic of Macedonia). However, now there are only measurable numbers of people in Greece and Bulgaria. For women's outfits there are thirteen parts. Most items are made from hand-wooven wool. There have been significant decreases in the population of Sarakatsani due to urbanization. Many have willing left; however, others have left because there is not enough open land to support their lifestyle