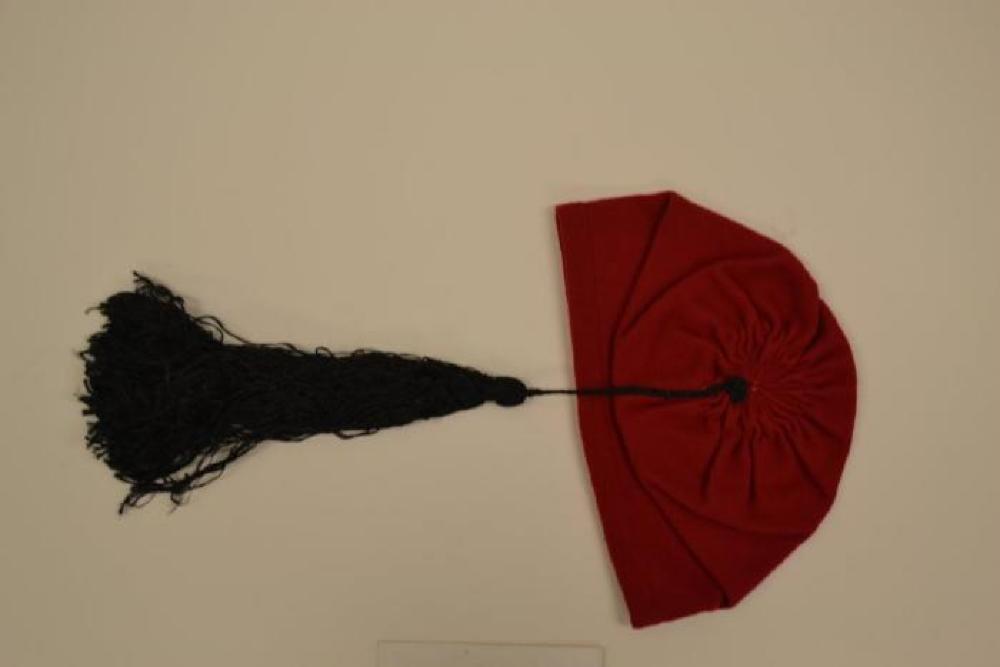 Red fez with black tassel. The black tassel is made of shiny black yarn. The individual strings of yarn each have waves runing through them, they are not straight. Also, the ends have begun to fray. Near the top of the tassel there is black yarn wrapped around in order to bundle the long yarn strings to hold them together. The tassel is connected to the hat by a long braide made form the black yarn. The braide is rolled into a circle and attached to the hat. The hat is made from pressed wool fabric. The outside of the hat has the seam about a half an inch from the bottom. At the top of the hat, the frabic is pulled together. In the center of the fabric that is pulled together is the braided circle connecting the tassel. The pulled together fabric looks like waves. The inside of the hat has a seem about a half an inch from the bottom with orange string. On one side there is a seam going from top to bottom. The upper half of one side there are waves being created from the pulled fabric. The top of the hat is pulled and sewed to the side of the hat.

This Fez was donated on the behalf of Louis Vellos who brought it over from Greece in the early 1950s. The Fez was created by the Greeks and was popular on the Greek Islands. Later, the Ottoman Empire adopted the hat in order to moderize. However, in 1925 the Fez was banned in Turkey in efforts to modernize. Between 1400-1700, the Fez was used as head armor during war time. The Fez is part of the Amalia style of dress. The look includes a loose-fitting shirt, an embroidered vest, Tsarouxia (shoe), and fustanella which is a skirt-like garmet. The stocking is part of a child's Foustanella. The Foustanella is the official uniform of the Evzones who are the Presidential Guards. The Foustanella is the official costum for men.