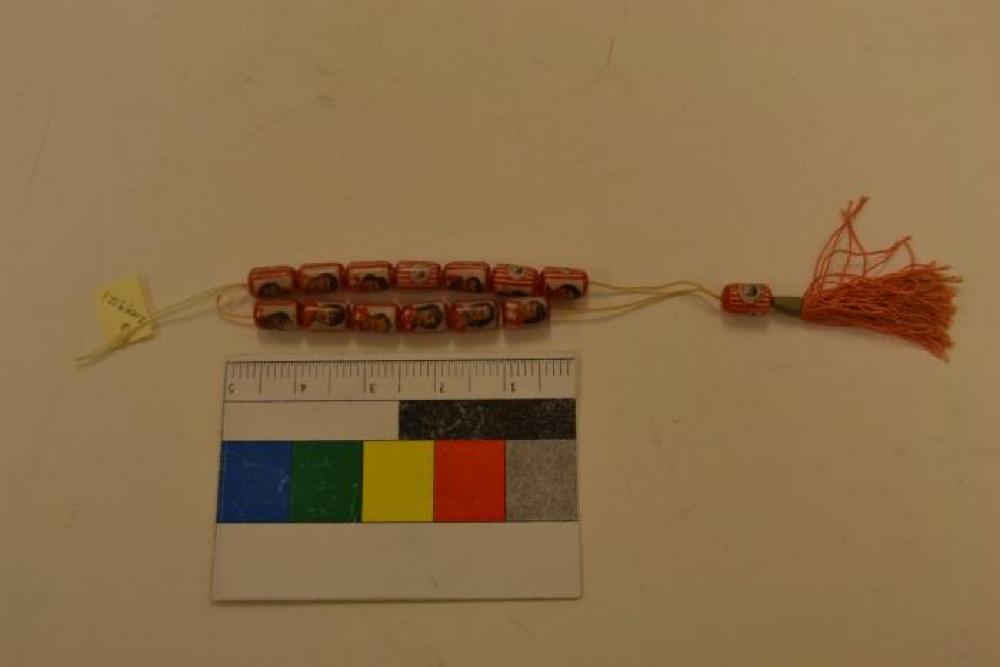 The komboloi has thirteen beads and every bead has a picture of a "Olympiakos" soccer team player and the Olympiakos logo set against a background of red and white vertical stripes. The tassel is a faded red and the string linking the beads with the soccer player's faces is cream-colored. Judging by the sliver of the uniform that can be seen, the komboloi is likely from the 1970s or 80s.

Olympiakos F.C., also known simply as Olympiakos, Olympiakos Piraeus or with its full name Olympiakos C.F.P. is a Greek professional football (soccer) club, part of the major multi-sport club Olympiacos CFP, based in Piraeus. Olympiacos is the most successful club in Greek football history, having won 40 Greek League titles, 26 Greek Cups,16 Doubles, and 4 Greek Super Cups, for a total of 70 national titles. The club's stadium is the Karaiskakis Stadium in Piraeus. Olympiakos is the most popular Greek club with around two and a half million fans inside Greece and millions of others in the Greek communities all over the world. Olympiakos was placed ninth on the list with the most paid up members in the world in 2006, having 83,000 registered members as of April 2006. They share a great and long-standing rivalry with Panathinaikos, with whom they contest the derby of the eternal enemies. Komboloi is a string of beads manipulated with one or two hands and used to pass time in Greek and Cypriot culture.