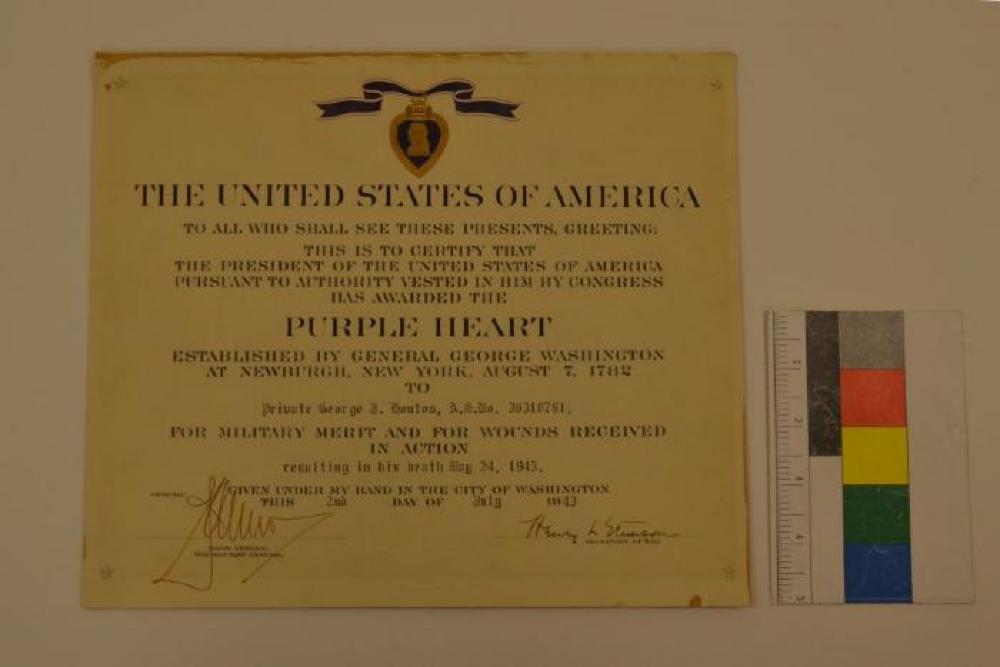 Purple Heart certificate awarded to Private George J. Hontos for wounds received in combat resulting in his death on May 24, 1943. Awarded July 2, 1943. Centered at the top is an image of a heart-shaped medal on a purple ribbon. A small silver star is in each corner of the certificate. The U.S. War Office stamp is embossed at bottom center. 16 lines of printed text read: "The United States of America to all who shall see these presents, greeting: this is to certify that the President of the United States of America pursuant to authority vested in him by Congress has awarded the Purple Heart established by General George Washington at Newburgh, New York, August 7, 1782 to Private George J. Hontos, A.S.No. 36310791, for military merit and for wounds received in action resulting in his death May 24, 1943. Given under my hand in the city of Washington this 2nd day of July 1943." Official signature of Major General, the Adjutant General bottom left in script and the Secretary of War (Henry L. Stimson) bottom right in script.

George James Hontos, was born in Chicago, Illinois on March 27th, 1920. The son of James and Cornelia Hontos, brother of Dimitra, Arthur and John, who also served in the United States Navy. Two weeks following the Pearl Harbor disaster, he was called to serve his country. He trained for six months at Camps Hulen and Wallace, Tex. On March 1, 1942, the 434th Coast Artillery Battalion (Anti-Aircraft) was activated. With this outfit, he was sent to England. After the completion of training, they took part in the liberation of Africa. The Tunisia Campaign was a series of battles in which Allies attempted to secure Northern Africa and open the Mediterranean for shipping. Success in North Africa would also give Allies the entry-point to invade Italy. Although American forces landed in Algeria in Novemeber, 1942, they did not reach the capital city of Tunisia until May 7, 1943. George J. Hontos was involved in the Tunisia Campaign and was killed by a landmine left behind by Axis forces whil trying to aid wounded women and children in Tunisia on May 24, 1943. He was posthumously awarded the Soldier's Medal and The Purple Heart. The Purple Heart is a United States military decoration awarded in the name of the President to those who have been wounded or killed while serving on or after April 5, 1917 with the U.S. Military. With its forerunner, the Badge of Military Merit, which took the form of a heart made of purple cloth, the Purple Heart is the oldest military award that is still given to members of the U.S. Military, the only earlier award being the obsolete Fidelity Medallion. The National Purple Heart Hall of Honor is located in New Windsor, New York.