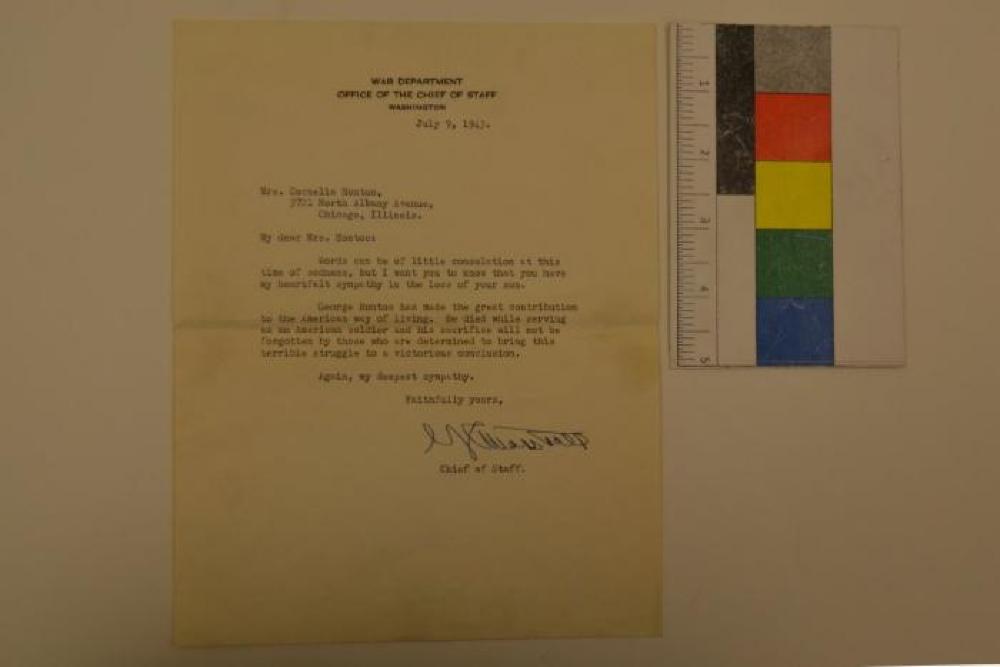 Letter from the Chief of Staff of the War Department to George Hontos' mother, Cornelia Hontos, offering condolences. Letter reads in 16 lines of type: "July 9, 1943. Mrs. Cornelia Hontos, 3721 North Albany Avenue, Chicago, Illinois. My dear Mrs. Hontos: Words can be of little consolation at this time of sadness, but I want you to know that you have my heartfelt sympathy in the loss of your son. George Hontos has made thegreat contribution to the American way of living. He died while serving as an American soldier and his sacrifice will not be forgotten by those who are determined to bring this terrible struggle to a victorious conclusion. Again, my deepest sympathy. Faithfully yours, ('G Marshall' in script) Chief of Staff." Letterhead reads "War Department, Office of the Chief of Staff, Washington" in all caps.

George James Hontos, was born in Chicago, Illinois on March 27th, 1920. The son of James and Cornelia Hontos, brother of Dimitra, Arthur and John, who also served in the United States Navy. Two weeks following the Pearl Harbor disaster, he was called to serve his country. He trained for six months at Camps Hulen and Wallace, Texas. On March 1, 1942, the 434th Coast Artillery Battalion (Anti-Aircraft) was activated. With this outfit, he was sent to England. After the completion of training, they took part in the liberation of Africa. George died from a landmine left by the Nazis, trying to aid some wounded women and children in Tunisia, on May 24th, 1943. Private George J. Hontos was posthumously awarded the Soldier's Medal and the Purple Heart. Form letter sent by the war department offering condolence to the families of fallen soldiers. Signed by George C. Marshall, Chief of Staff of the War Department during World War II.