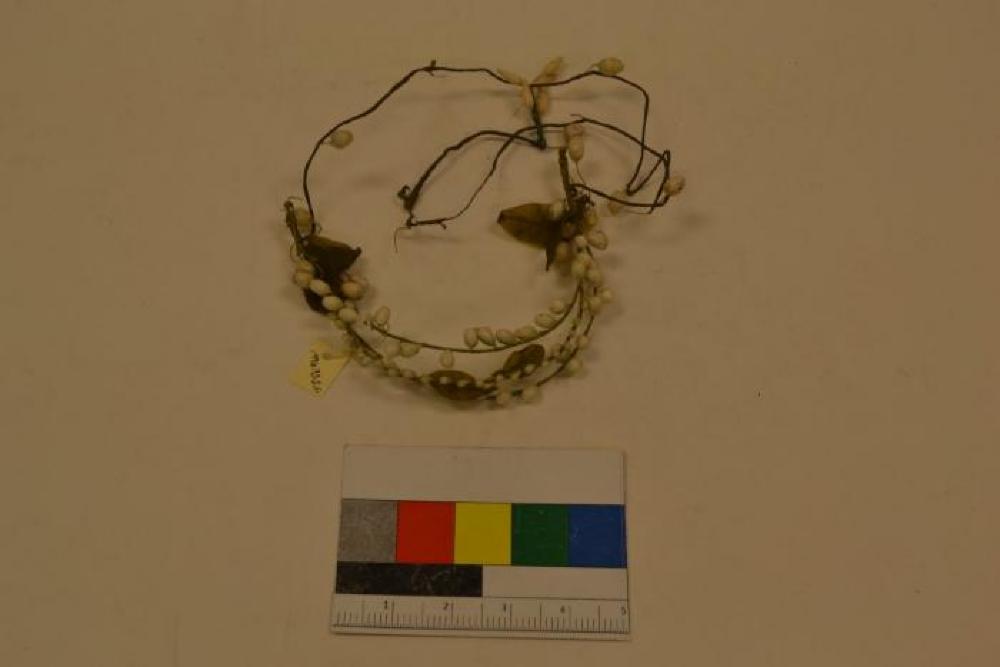 Avgidis, Frances (is related to)

This is the third piece in the set of Marriage Crowns (Stefana) that consists of 3 pieces; 2 crowns, and a this smaller piece of decorative wire.  This item has two 'u'-shaped pieces of decorative wire connected at each end.   Like the  crowns, the wires are simply covered with green floral tape and decorated with ivory pearls and an occasional green leaf resembling almond flower buds and branches.

Foti (Frank) Panayoti Avgidis was born in Balukiser(sp?), Turkey in 1894 of Greek parents. In 1912 he immigrated to America in order to escape being drafted into the Turkish Army. As a young man he worked in his brother in law's bakery in Crystal City, MO. His brother in law returned to Turkey to bring his family back to America, but was caught up in the massacre of the Greeks by the Turks. All of my father's family, mother, father, sisters and brother in law were all massacred. Mr. Avgidis then worked for the railroad, laying railroad ties as the west was becoming the new frontier. He worked all the way to the state of Washington. Merssini Kefala was born in Pelikintos (sp?), Mytelene, Greece in 1904 (?). She immigrated to America in 1923 accompanied by her sister in law to be. They came to Stallings, IL to the farm owned by Peter and Vasil Kefalas, her brothers. Mr. Avgidis was a friend of Peter and Vasil Kefalas and thereby the couple became acquainted. They were married December 7, 1924 in the home that Foti had built for his new bride. They had two children, Diana and Frances. There were married 48 years. Both Mr. and Mrs. Avgidis are deceased along with their daughter Diana.