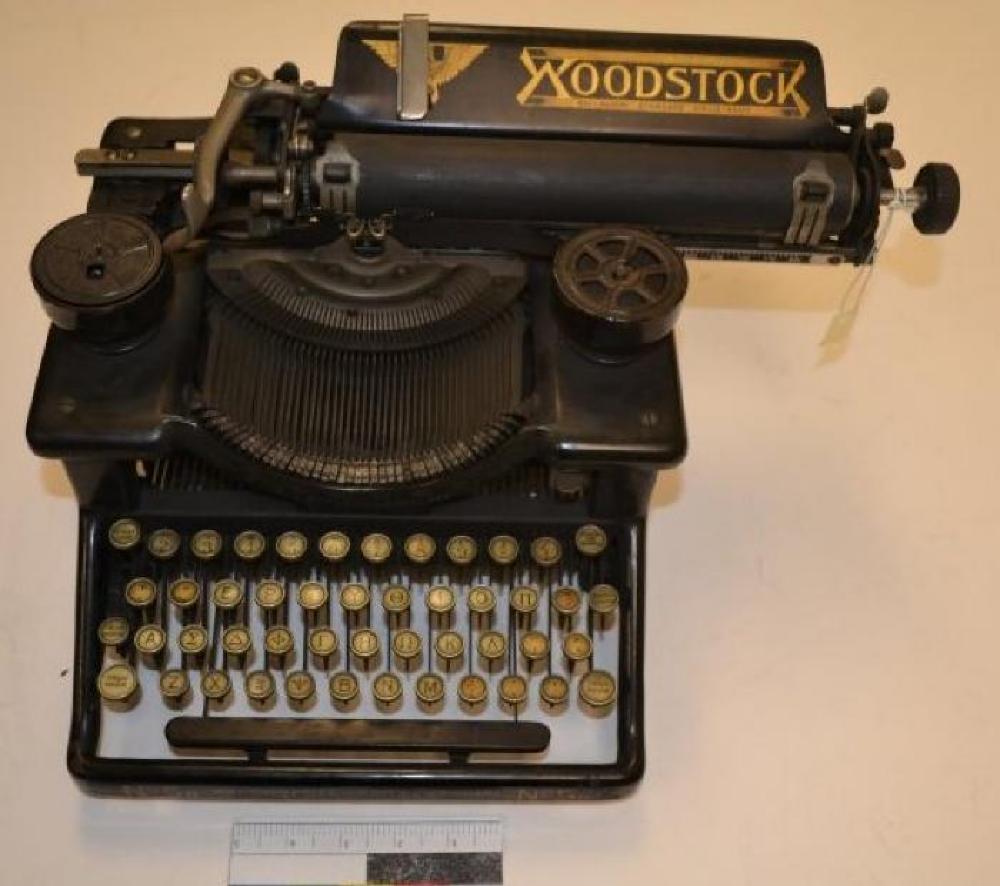 STOCKWOOD TYPEWRITER, (created by)
Geocaris, James (is related to)

Black manual typewriter with Greek letter keys. This is a Woodstock No.4 model typewriter. There is a "WOOSTOCK" logo and decal above the platen. Beneath the logo are the words "BALL-BEARING STANDARD SINGLE-SHIFT". The logo and decal are in gold-tinted lettering. Beneath the space bar, along the bottom of the frame of the typewriter are the words "WOODSTOCK TYPEWRITER COMPANY" (the R at the end of typewriter is worn off a little) then below that says "WOODSTOCK, ILL. U.S.A.". On each side of the logo "No5D" is printed in large letters. All of this is again in gold-tinted writing. The typing keys are white with black letters. The white backgrounds on many of them is yellowed. There is a little rust on the ribbon spools, along the frame and on the carriage return lever. On the back side of the typewriter is patent information which lists the dates of the patents from Feb. 22, 1910 and runs through 12 more dates until Aug. 1 1916. This date is listed twice; once at the end of the list and again beneath it. This perhaps an indication of the manufacturer date of the typewriter.

Woodstock Typerwriter Company was formerly the Emerson Typewriter Company. Emerson began in 1907 and it's typewriters were designed by Richard Uhlig. Though originally in the northeast, the offices moved Chicago and the factory itself was in Woodstock, Il. Unfortunately at first, due to the goal of maintaining a low buyers price, the manufactor of the machines was faulty. The company began to default on loans. Alvah C. Roebuck of Sears Roebuck took control of the company and after the failure of the Harris Visable typewriter the company introduce an dentirely new design called THe Woodstock, in 1914. The design was a correcting of the faults of the Harris, namely poor design and manufacturing. Emerson also changed it's name to the Woodstock Typewriter Company. The Woodstock machine itself was a complete success and the company began taking backorders of it. The world record for typing in 1922 was set on a Woodstock machine. By 1922, with the efforts of both ther Woodstock typewriter company and the thomas Oliver Typewriter Company, nearly half of the world's typewriters were produced in Woodstock. Roebuck retired in 1924.