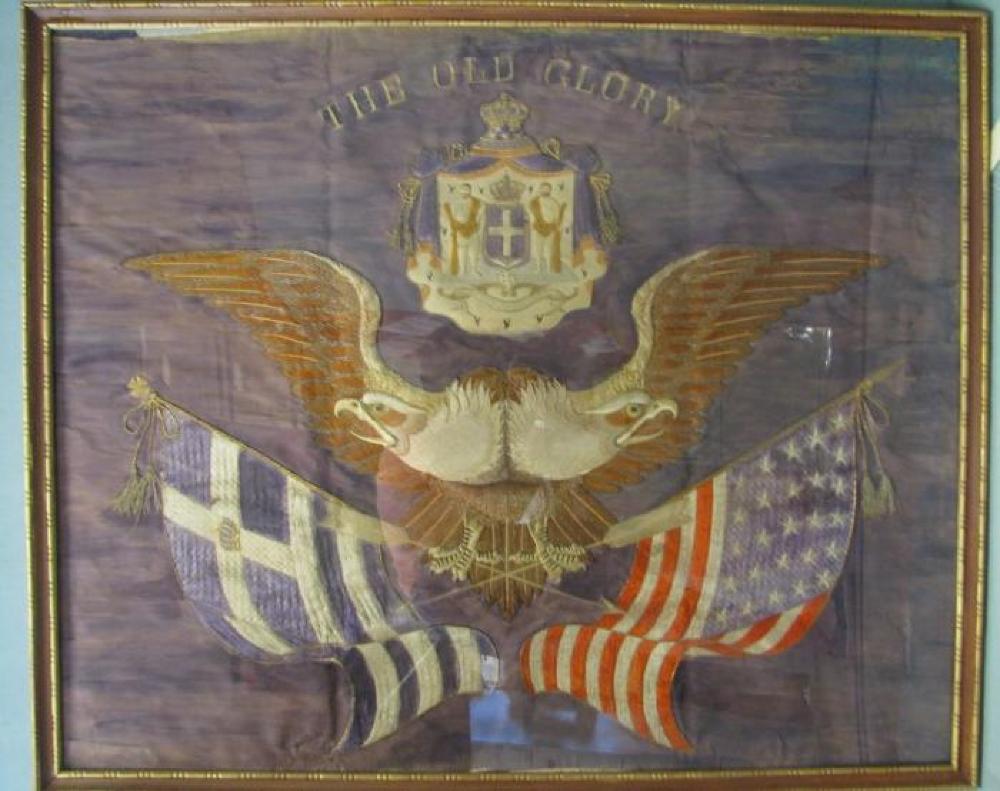 This is a fabric collage of "The Old Glory." Underneath the title "The Old Glory" are two men in robes standing on either side of a crown. This is all resting atop a two-headed eagles, with wings spread. Under the left eagle's wing is the American flag (depicted with 26 stars) and under the right eagle's wing, the Greek flag. The piece is in a red and gold painted frame.

Chris Drikakas recieved two images, hand embroidered, which were made approximately between 1876 and 1889 from Chris Effrem. Chris Effrem owened these peices for approximately thirty years. Chris Effrem was a Greek sailor who jumped ship in 1950 and swam to shore in San Diego. Soon after arriving in California, he met his soon-to-be wife. Effrem was intrigued with the idea of a city which combined Indian and Greek roots; Minneapolis. He moved there within a year or so of living in the United States. He opened a wood carving shop in Minneapolis, called "Chris Effrem Wood Carving Shop". Effrem was once a student in Athens, where he learned to draw and carve, creating art and furniture. Many people trained under Effrem's "master" until he closed his shop. After this closure, he continued to work at his sons' shop. Effrem was Vice President of the National Woodcarvers Association from1975 to 1982. He also judged international woodcarving competitions. Effrem's work can be seen at St. Mary's Greek Orthodox Church, St. Mark's Episcopal Cathedral, Cenntenial High School in Circle Pines, as well as at Corporations and Mansions. He carved many different things including: human figures, animals, and architectural elements. His work could be considered modern or classical.