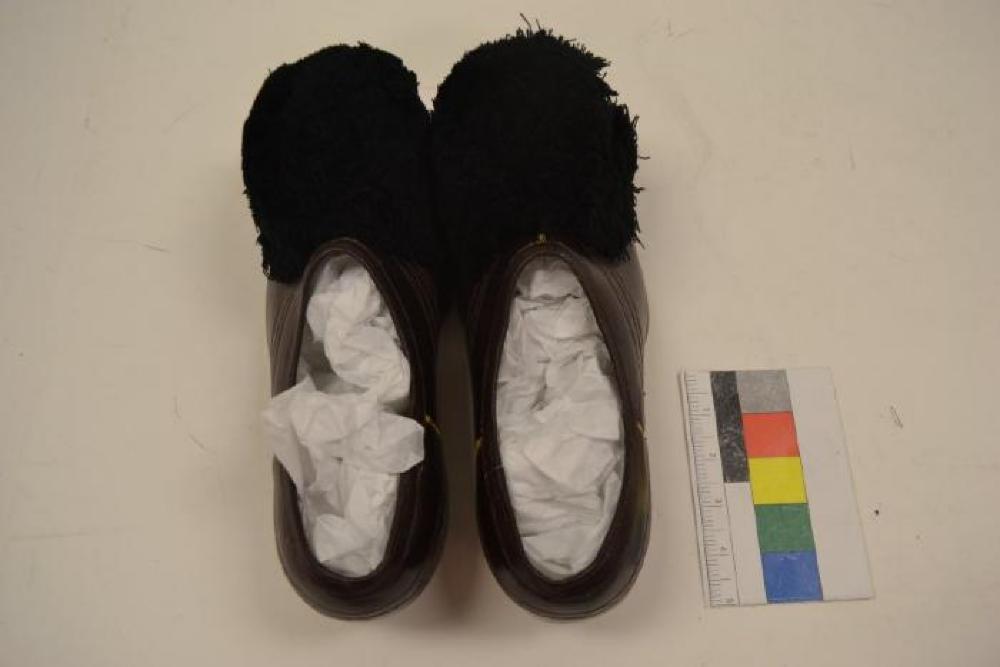 Frigas, . (collected by)
Stavrakis, by (created by)

One of a pair of brown leather tsarouxia (slippers) with large black pompon. Leather has minute detailing with brown thread and near the heel, a gold vertical embellishment. Part of an Evzones costume.

Tsarouxia shoes are typically known nowadays as part of the traditional uniform worn by the Greek guards known as Evzones. Their origin is obscure and goes back to the Byzantine times, with influences from styles imported by neighbouring tribes, including the Turks. Originally, various types of similar shoes were worn all over the Balkans, but tsarouhia are mainly associated with the Greeks. They were the most common footwear worn by both urban and rural Greeks, mainly men, but also many women. After the Greek Independence in early 19th century, their use was limited to isolated rural areas and nomadic populations, seen by westernised urbanites as sign of uncouthness and backwardness. In a version with reinforced sole, they remained the issue boot for the Evzone units well into the 20th century, though after First World War were gradually replaced in active service by the standard laced boot. Tsarouxia provided a clear link with the origin of the Evzone uniform in the traditional Greek costume, and the fact that Evzones were largely enlisted from rural mountainous regions of Greece. Nowadays are almost exclusively used by the Presidential guard and in various traditional festivals and dances along with other traditional Greek garments. Tsarouxia are typically made of a number of pieces of stiff leather hand-sewn together and have a characteristic pointy nose, usually covered by a large woollen pompon. The latter was a relatively late addition, originally a way of making the shoe nose waterproof, but increasingly became an essential feature for their decoration. Simpler versions also exist, made from one piece of leather held in shape with thongs (a very common type found everywhere in the Balkans, e.g. Opanak or Charvuli) and without any decoration.