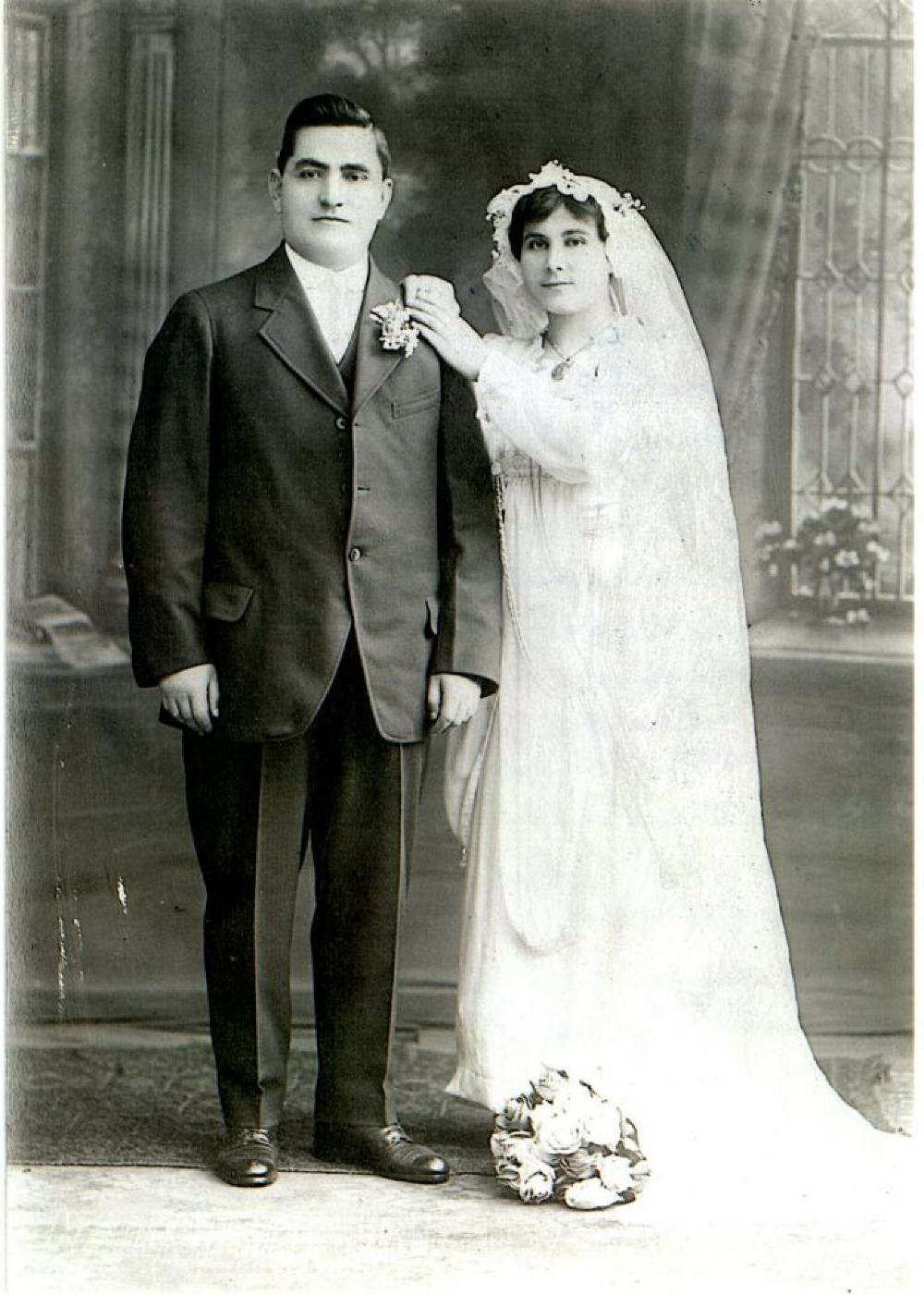 Formal black and white wedding portrait, with the groom on the left and the bride on the right. The bride has a bouquet at her feet. She is wearing a long white dress with train, and a long, almost floor length, lace veil. She is also wearing a necklace with a locket.  Both hands are resting on the groom's left shoulder. He is wearing a dark tuxedo with white shirt.  The top two buttons of the jacket are unbuttoned.  There's a boutonniere in his lapel. The back of the photo has writing in green.

Christ of Arvenito Kerasea, Greece married Demetra Chipianitis (Chimain) of Statneon, Tegea, Greece in Holy Trinity Greek Orthodox Church on Peoria Street, Chicago. They were both early Greek immigrants. He brought his bride to Elmhurst and they lived in one of the buildings he had built. Christ Anagnostopoulos (Poulos) came to America from Arvanito Kerasea, Greece at the age of 14, with but a few pennies in his pocket. He was one of the early Greek immigrants to come to America and was very ambitious and enterprising. there was talk among the Chicago Greek immigrants at that time, that the small towns west of Chicago were the place to be for making money. So he took a train to Elmhurst IL on Thanksgiving Day and liked what he saw. He noticed a vacant store across the street from the Chicago and North Western Railroad Station, and he approached the owner and told him that since he had now money and the owner had the vacant store, would he allow him to occupy the store with a restaurant, make money, and they both would fare well. The owner agreed, and within a very short time, he prospered and he had a building put up a few doors away. In the newly built building, he opened the Elmhurst Candy Kitchen. Shortly thereafter, he had the 125 West First Street building built for the De Luxe Restaurant. He also opened the same combination on Front Street in Wheaton, IL. He was the first Greek resident and the first Greek restaurant owner, not only in Elmhurst, but also in Dee Page County. Later, he added a building at 127 West First Street. His restaurant and candy store were the social gathering places for Elmhurst natives for many years. His picture is prominently and permanently displayed in the Elmhurst Historical Museum because of his business endeavors and because his building in the downtown area of Elmhurst helped in the development of early Elmhurst. His name appears often in the historical books on Elmhurst. Always aware of his good fortune - let alone sending money to his family in Greece, he gave freely to the Elmhurst Community - ice cream to Elmhurst College for their Ice Cream Socials, and Christmas candy boxes to the City's Childrens' Christmis programs. In addition to helping many poor families, he also became involves in Civic Affairs of the City, including sponsoring the founding of the Elmhurst Memorial Hospital. He was proud of his restaurants and candy stores and often said he brought ice cream to Elmhurst. Years later, he purchased a building at 605 West Randolph Street, Chicago, IL in which he had the Home Restaurant. He and his wife, the former Demetra Chipianitis (Chipain), were family oriented nad devoted parents. They had five children, Bessie, George, Mary, Helen, and Anna (Becky).