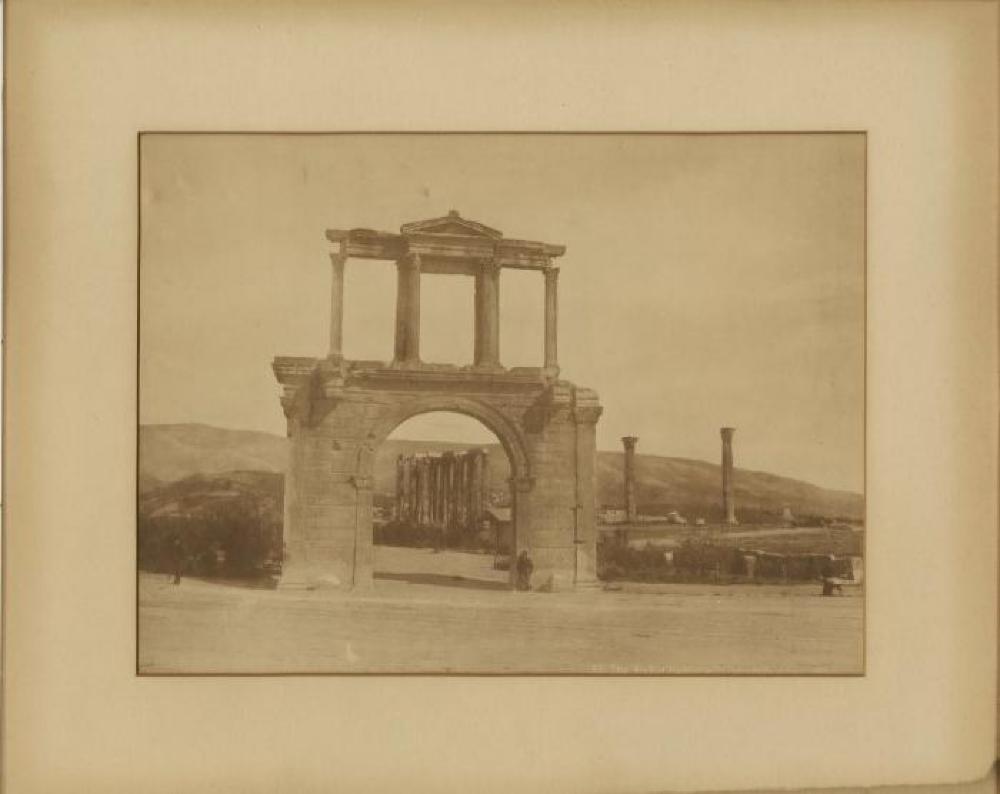 Liakouras, Chris (is related to)

Sepia toned photo. Subject is of the Arch of Hadrian in Athens, Greece. The structure has two levels. The single arched passageway of the lower level is 6.5m wide and was supported by pilasters crowned with Corinthian capitals. Similar, but taller, pilasters flank the outer corners of the lower level. The space between the outer pilasters and the arched opening was filled in with squared stones with drafted edges to emphasize the design. On either side of the central passageway was a Corinthian column on a rectangular, raised base projecting from the center of the wall. The lower level was crowned with an Ionic architrave capped with dentils and a projecting geison. The upper level of the arch (the attic) was composed of a series of Corinthian columns and pilasters dividing the space into three rectangular openings. Each of the outer openings was crowned with an Ionic architrave capped with dentils and a projecting geison, in the manner of the lower level. The central opening, however, was flanked by antae with engaged Corinthian half-columns that supported a projecting triangular pediment, which rested above the dentils, geison, and sima that joined to those of the two wings. At the peak of the pediment, there was a small vegetal acroterion. There is a man standing on the right side of the major archway, and another man to the left of the entire structure. In the background, the Temple of Zeus can be seen, along with many smaller contemporary structures (possibly a small village) and two single standing columns. There are mountains in the background and trees all around the monuments. At the bottom reads "50 The Arch of Hadrian with the Temple of Zeus, Athens".

The Arch of Hadrian, most commonly known in Greek as Hadrian's Gate, is a monumental gateway resembling – in some respects – a Roman triumphal arch. It spanned an ancient road from the center of Athens, Greece, to the complex of structures on the eastern side of the city that included the Temple of Olympian Zeus. It has been proposed that the arch was built to celebrate the adventus (arrival) of the Roman Emperor Hadrian and to honor him for his many benefactions to the city, on the occasion of the dedication of the nearby temple complex in 131 or 132 AD. It is not certain who commissioned the arch, although it is probable that the citizens of Athens or another Greek group were responsible for its construction and design. There were two inscriptions on the arch, facing in opposite directions, naming both Theseus and Hadrian as founders of Athens. While it is clear that the inscriptions honor Hadrian, it is uncertain whether they refer to the city as a whole or to the city in two parts: one old and one new. The early idea, however, that the arch marked the line of the ancient city wall, and thus the division between the old and the new regions of the city, has been shown to be false by further excavation. The arch is located 325m southeast of the Acropolis.