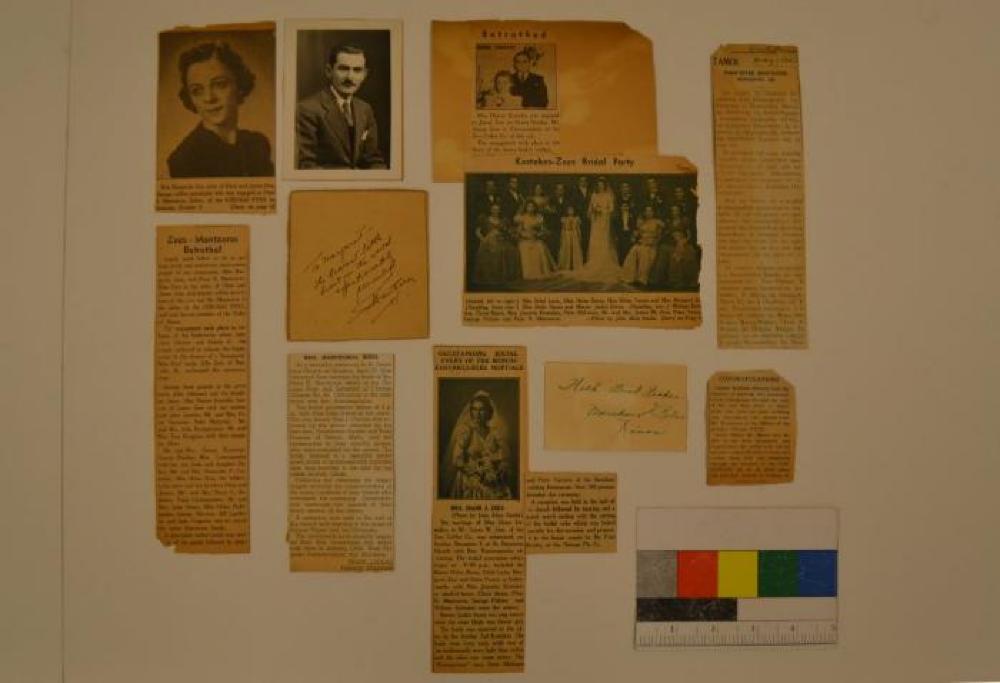 This is a collection of ephemera from Peter and Margaret Mantzoros' first year of marriage. There are several newspaper clippings: the announcement of Margaret Zees' betrothal to Peter Mantzoros, and the announcement of their wedding in April 1941. Betrothal and wedding announcement of Margaret's brother James Zees and Dianne Kostakis. One of the Mantzoros' wedding invitations. A black and white photograph of Peter Mantzoros with a note that reads "To Margaret, the dearest little heart in the world, effectionately presented," and his signature in script. Dried red rose petals inside a small envelope with an "Anniversary Greetings" card signed "With Love, Pete." A pink certificate with Greek text, dated January 24, 1941 (marriage license?). Clippings of three issues of the Chicago PNYX, of which Peter Mantzoros was editor, with article "Midwestern ramblings" in which he documents his and Margaret's honeymoon trip to Ohio, Indiana, West Virginia, Pennsylvania, and Michigan and the Greek Americans they met and visited with along the way. Other clippings with printed congratulations for the Mantzoros couple. 80 telegrams from friends and relatives across the United States congratulating the couple on their wedding and giving them best wishes. A Christmas card from Peter to Margaret: image of candles and pointsettias on the front with a red ribbon and printed text "Christmas Greetings to one I love," image of church in snowy field inside with a printed message "It is my wish that Christmas time, May never bring you less, Than all the good that life can hold, And all of happiness; It is a source of joy to me, To greet you in this way, Because I love you very much, And love means most, today!" and signed "Margaret (underlined), To the dearest little girl, with love from Pete."

This collection of epehemera was donated to the museum along with other photographs from Peter and Margaret Mantzoros' life. All the newspaper clippings and telegrams, etc., were glued to paper pages in an album. The paper was in very bad condition, with the edges disintegrating and large pieces falling off every time it was touched. We removed the artifacts from the album in order to preserve them as best as possible. At the time of their wedding, Peter and Margaret were considered "prominent Greek Chicagoans." Peter Mantzoros was Editor of the Chicago PNYX, a monthly Greek American newspaper. Less is known about Margaret (Maragarita) Zees. She had two brothers, Chris and James Zees, who owned Zees Coffee Co. One of the newspaper clippings describe the couple's engagment party at the bride's home on October 5, 1940, with sixty close relatives and friends gathered. Another describes their wedding, which was officiated by Rev. Pantazopoulos at the St. Demetrios Church in Chicago. The pages from the Chicago PNYX document the couple's honeymoon to Ohio, Pennsylvania, West Virginia, Michigan, and Indiana. The wedding telegram congratulations came from friends and family as well as several Greek Americans and business acquaintances of Peter's around the United States. Peter went on to serve in the U.S. Military during World War II. He was also very involved in AHEPA, the American Hellenic Educational Progressive Association, an advocacy organization that supports Greek American charities, causes, and communities. It works closely with the Greek Orthodox church. In 1966, he wrote a book titled "AHEPA and I across the years."