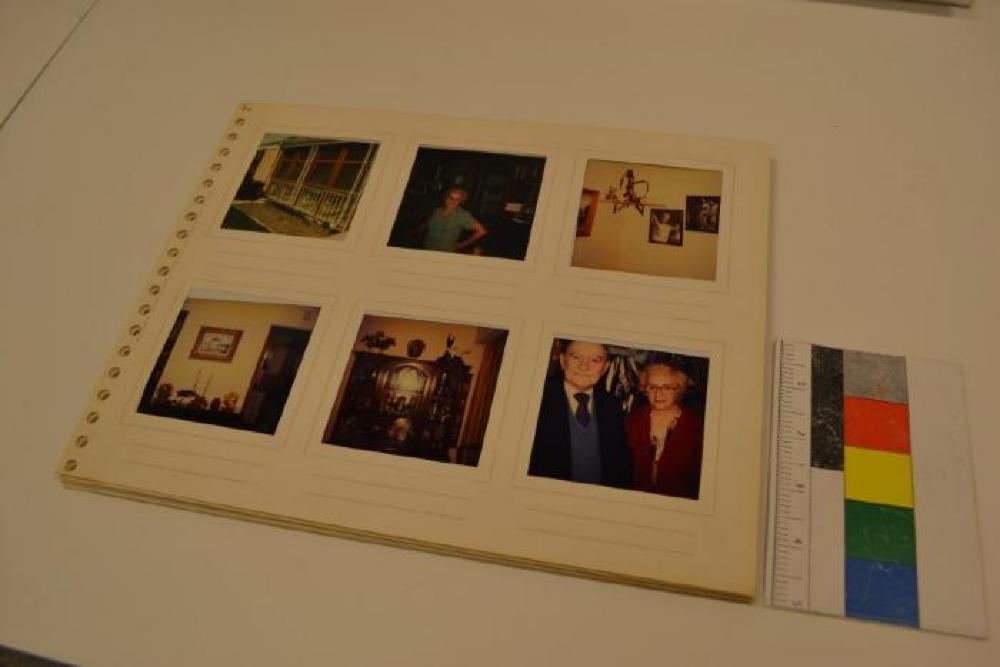 Album pages containing 69 photographs, some in color and some in black and white. The pages are off-white with six openings for photographs. There is a row of holes along the left edge where they were spiral-bound. Under each opening front and back there are 2 lines for captions. Only the last 2 pages are captioned. These photographs document events and places in the life of Peter and Margaret Mantzoros during the late 1960s and early 1970s. Details of the exterior and interior of the Mantzoros' home are pictured, showing objects such as a hookah, a china cabinet, and photographs of classical statuary hung on the walls. Several photographs show copies of Peter's 1966 book, "AHEPA and I across the years," laid out on the dining room table. There are various interior photographs of libraries/studies, offices, and individuals, presumably friends or business acquaintances of the Mantzoros'. Detail shots include a cat and a Greek vase. Many of the photographs depict groups of men and women in formal attire, posing or mingling. In some, the people wear name tags as if at an organization or business event. Several speakers are shown behind a podium, and a group of men wear straw hats that say "SEKLES." An exterior of a building has a sign that reads "Sweden House." Interspersed with these photographs are images of architectural ruins and monuments, including the Agora, from a trip to Greece. There are also some photographs of a hotel pool.

This album was donated to the museum along with other photographs and artifacts from Peter and Margaret Mantzoros' life. At the time of their wedding, Peter and Margaret were considered "prominent Greek Chicagoans." Peter Mantzoros was Editor of the Chicago PNYX, a monthly Greek American newspaper. Less is known about Margaret (Maragarita) Zees. She had two brothers, Chris and James Zees, who owned Zees Coffee Co. Peter served in the U.S. Military during World War II. He was also very involved in AHEPA, the American Hellenic Educational Progressive Association, an advocacy organization that supports Greek American charities, causes, and communities. It works closely with the Greek Orthodox church. In 1966, he wrote a book titled "AHEPA and I across the years."