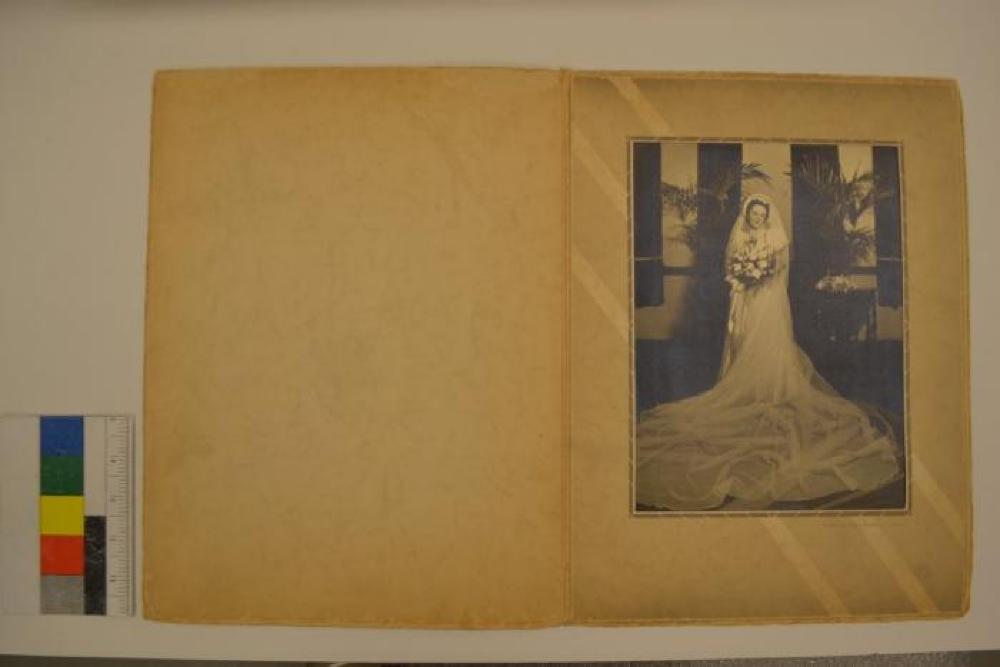 Black and white wedding portrait. The bride stands center facing slightly to the image left with her head tilted toward image right. She looks up and to the right of the camera lens. She is holding a large bouquet of flowers and greenery in front of her waist, tied with a large silk bow at image left. Her gown has large puffed sleeves with a lace bodice and tulle skirt. The outside layer of the skirt opens in an upside down V-shape descending from the waist in front, and its edges are lined with lace. The bride also wears a bonnet with a long tulle veil attached in back. The veil flows to her side (image right) and is arranged in front of her, spread over several feet of the floor in the foreground. Her hair is pinned up under the bonnet, but rows of curls are visible on each side of the part, which is slightly to the image right of her head. Above her hair but under the bonnet brim is a cluster of small flowers. She is wearing large round pearl earrings and a pearl necklace. She has a soft oval face, very dark hair and dark lipstick. Her eyes are large and dark. She is smiling, and there is a dimple in her cheek. The wall behind the couple is light colored with a dark chair rail at the height of their waists. There are four dark curtains/banners hung vertically on the wall, spaced equally apart. On each side of the couple a large indoor plant. These are comprised of large bunches of tall palm branches. An ornate vase is visible at the base of the plant at image right. Also at image right, part of a table or desk is visible. The floor is very dark. On the cardboard frame, right outside the image, is a gray and tan diagonally striped border 1/8 of an inch wide. Three 7/16 in. diagonal stripes run from the top left to bottom right corner, each spaced an inch and a half apart. At bottom right under the image is written "Portrait by Aristo Studio - Chicago" in type.

This photograph of Margaret (Zees) Matzoros on her wedding day, Sunday, April 27th, was found in the collection. Little is known about the donation. This photograph and two photographs of the bride with her husband, Peter Matzoros (F2014.150 & .152), were previously stored in a box along with two containers of photographic slides and negatives, two family albums (F2014.156 &.158), and one album containing newspaper clippings and correspondence from the Matzoros couples' life together (F2014.157). The bride's gown and bonnet, as well as her hairstyle, are in a style popular during the late 1930s and early 1940s. It is described in the wedding announcement as "marquesete" with imported lace. At the time of their wedding, Margaret and Peter were considered "prominent Greek Chicagoans." Peter Mantzoros was Editor of the Chicago PNYX, a monthly Greek American newspaper. Less is known about Margaret (Maragarita) Zees. She had two brothers, Chris and James Zees, who owned Zees Coffee Co. The couple had an engagement party at the bride's home on October 5, 1940, with sixty close relatives and friends gathered. Their wedding was officiated by Rev. Pantazopoulos at the St. Demetrios Church in Chicago. They went on a honeymoon to Ohio, Pennsylvania, West Virginia, Michigan, and Indiana. This appears to have been a business trip for Peter as well. He wrote about the trip over the course of three issues in his magazine.