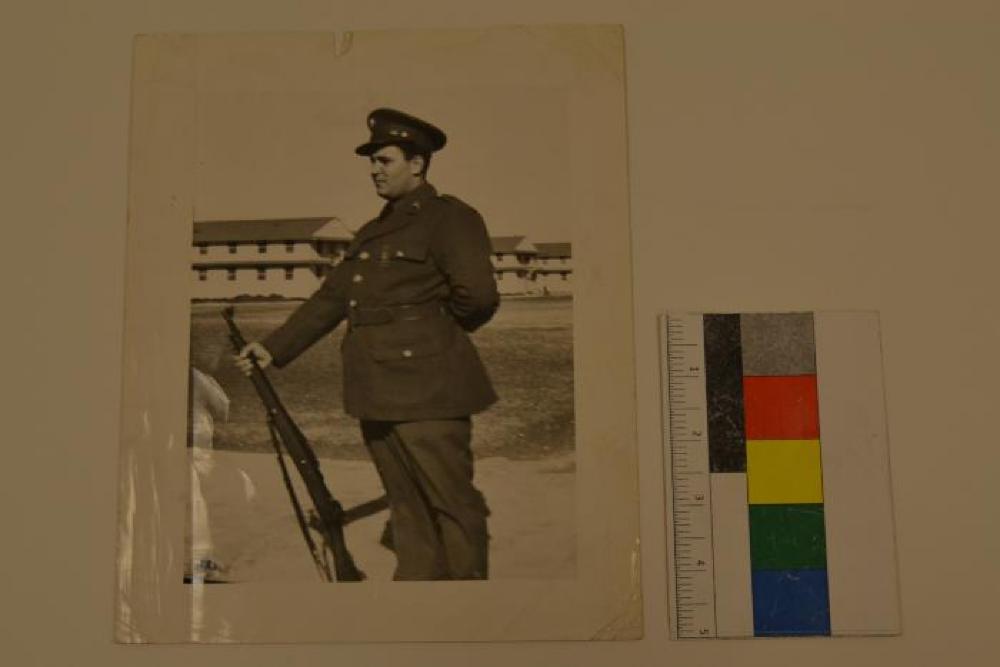 Black and white photograph of George J. Hontos standing in his army uniform in the "at ease" position (legs shoulder-width apart, left arm clasped behind back) while holding a rifle. Hontos is standing at a three-quarter angle to the camera, facing left. His right arm is straight, holding the barrel of the rifle away from his body, its stock on the ground. The image is cropped at his ankles. There are several two-story buildings (barracks?) in the background and a grassy patch of lawn. Hontos is standing on a lighter patch of ground or cement. Image itself is 7.875 x 6 in. with a 1 inch white border all around.

George James Hontos, was born in Chicago, Illinois on March 27th, 1920. The son of James and Cornelia Hontos, brother of Dimitra, Arthur and John, who also served in the United States Navy. Two weeks following the Pearl Harbor disaster, he was called to serve his country in the Army. He trained for six months at Camps Hulen and Wallace, Texas. On March 1, 1942, the 434th Coast Artillery Battalion (Anti-Aircraft) was activated. With this outfit, he was sent to England. After the completion of training, they took part in the liberation of Africa. George died from a landmine left by the Nazis, trying to aid some wounded women and children in Tunisia, on May 24th, 1943. Private George J. Hontos was posthumously awarded the Soldier's Medal and the Purple Heart. This photograph shows George J. Hontos standing in his army uniform on base at either Camp Hulen or Camp Wallace in Texas. The "at ease" position is used when soldiers are waiting for a short time before being called to attention, perhaps while waiting for an Officer to arrive for inspection.