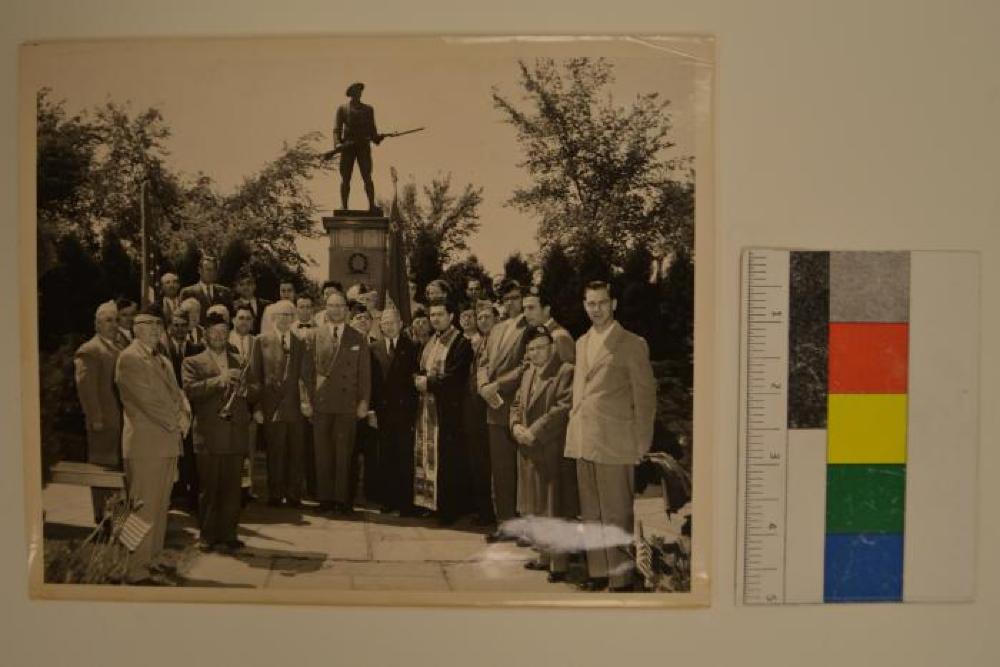 Dedication of the George Dilboy Memorial

Black and white photo of a group of 31 men and women gathered in front of the George Dilboy Memorial. They stand in a semi-circle in three rows. The memorial consists of a bronze life-size sculpture of a man wearing a World War I Army uniform and steel helmet, atop a tall concrete pedestal. The figure stands with feet apart, holding a rifle horizontally in front of his waist. Several feet of the pedestal are visible above the people standing below. It has Greek architectural motifs, including a frieze at the top with two Greek warriors separated by triglyphs. Below the frieze is a laurel, and below that "George Dilboy" is etched in all caps. To the right of the memorial is a flag with the number '13' hanging on an eagle-topped pole (Charter #13 of the Disabled Veterans of the World War funded the George Dilboy Memorial). At the left of the group is an American flag, also hanging on a pole with an eagle at the top. There are rows of trees in the near background. In each foreground corner is a patch of tulips and a small American flag stuck into the grass on a pole. A concrete bench extends from the left edge of the image. Several of the people in the group wear garrison caps with veteran's insignia. One of these men, in the front row at left, holds a trumpet. All of the men wear dress suits. Directly right of the memorial, in the front row, is a priest wearing a liturgical stole. In the backrow, closest to the memorial, are five women, two of whom wear garrison caps.

Photograph of a group of 31 men and women, including several veterans and a priest, in front of the George Dilboy Memorial at the Hines Veterans Administration Hospital in Hines, IL. Donated by Gene Douglas. George Dilboy (February 5, 1896–July 18, 1918) fought in four wars on three continents before he was 22 years old. He was a Private First Class in the U.S. Army, Company H, 103d Infantry, 26th Division and became the first Greek-American to receive the Medal of Honor during World War I, for leading an attack on a machinegun position and continuing to fire at the enemy despite being seriously wounded, killing two of the enemy and dispersing the remainder of the gun crew. General John Pershing listed George Dilboy as one of the 10 greatest heroes of who died on the battlefield in France. He is now buried in Section 18 of Arlington National Cemetery. Dilboy was born in the Greek settlement of Alatsata, in Ottoman Turkey. He immigrated to the United States in 1910 and settled in Somerville, Massachusetts. But he returned to mainland Greece in 1912 to fight in the Greek Army in Thessaly during the First Balkan War of 1912. He remained there to fight in Macedonia in the Second Balkan War of 1913. Returning to Somerville, he went to school and worked for a few years before volunteering to fight in the U.S. Army in the Mexican Border War in 1916-1917. He received an honorable discharge, but within months re-joined to fight in France during World War I. He was killed in 1918 at age 22. He died a hero at Belleau Wood near the Marne River in France, singlehandedly attacking a wooded area infested with machine gun nests. Dilboy destroyed three guns before the Germans fled. His death inspired his fellow soldiers to drive the German Army out of Belleau Wood and all the way back toward the German lines, as part of the Second Battle of the Marne that turned the course of the war for the Allies. Dilboy's Medal of Honor citation reads: "After his platoon had gained its objective along a railroad embankment, Pfc. Dilboy, accompanying his platoon leader to reconnoiter the ground beyond, was suddenly fired upon by an enemy machine gun from 100 yards. From a standing position on the railroad track, fully exposed to view, he opened fire at once, but failing to silence the gun, rushed forward with his bayonet fixed, through a wheat field toward the gun emplacement, falling within 25 yards of the gun with his right leg nearly severed above the knee and with several bullet holes in his body. With undaunted courage he continued to fire into the emplacement from a prone position, killing 2 of the enemy and dispersing the rest of the crew." In January 1919, after Dilboy's death, the Commanding General of the Northeastern Department presented his Medal of Honor to his father, who said, "Under other circumstances I would have shed tears because of my son's death. But when I learned of the manner in which he died, I was proud that he had given his life with honor the cause of his adopted country, the United States..." At the request of his father, Antonios, Dilboy was buried at his birthplace Alatsata, which was at that time a predominantly Greek city. After a funeral procession through the streets of his birthplace — said to have been witnessed by 17,000 mourners — his flag-draped casket was placed in the Greek Orthodox Church of the Presentation in Alatsata to lie in state before the high altar. But rampaging Turkish soldiers soon seized the town and during the three-year Greco-Turkish War of 1919-1922, Turkish troops recaptured Smyrna from the Greeks. The church was ransacked and Dilboy's grave desecrated. The American flag was stolen from atop Dilboy's coffin. The coffin was overturned, after which — according to an account by Bishop John Kallos — the bones of the Greek-American war hero were scattered by the marauding attackers. President Warren G. Harding was outraged and sent the warship USS Litchfield to Turkey in September 1922 to recover the bodily remains. Harding demanded and received a formal apology from the Turkish government. Dilboy's remains were collected and a Turkish guard of honor delivered his casket (draped once again in an American flag) to an American landing party in Smyrna. His remains were taken aboard the USS Litchfield and returned to the United States. On November 12, 1923, he was buried with full military honors at Arlington National Cemetery, where his gravestone proclaims his Medal of Honor status. Dilboy had the distinction of being honored by three U.S. Presidents, Woodrow Wilson, who signed the authorization awarding the Medal of Honor, Warren G. Harding, who brought him back to Arlington National Cemetery and Calvin Coolidge, former Governor of Massachusetts, who presided at his final burial. The George Dilboy Memorial was erected May 24, 1942 by the George Dilboy Memorial Foundation outside the Hines Veterans Administration Hospital in Hines, IL (a western suburb of Chicago.) It was rededicated with a ceremony the following two years. Each of the three photographs in this accession documents a different year's ceremony.