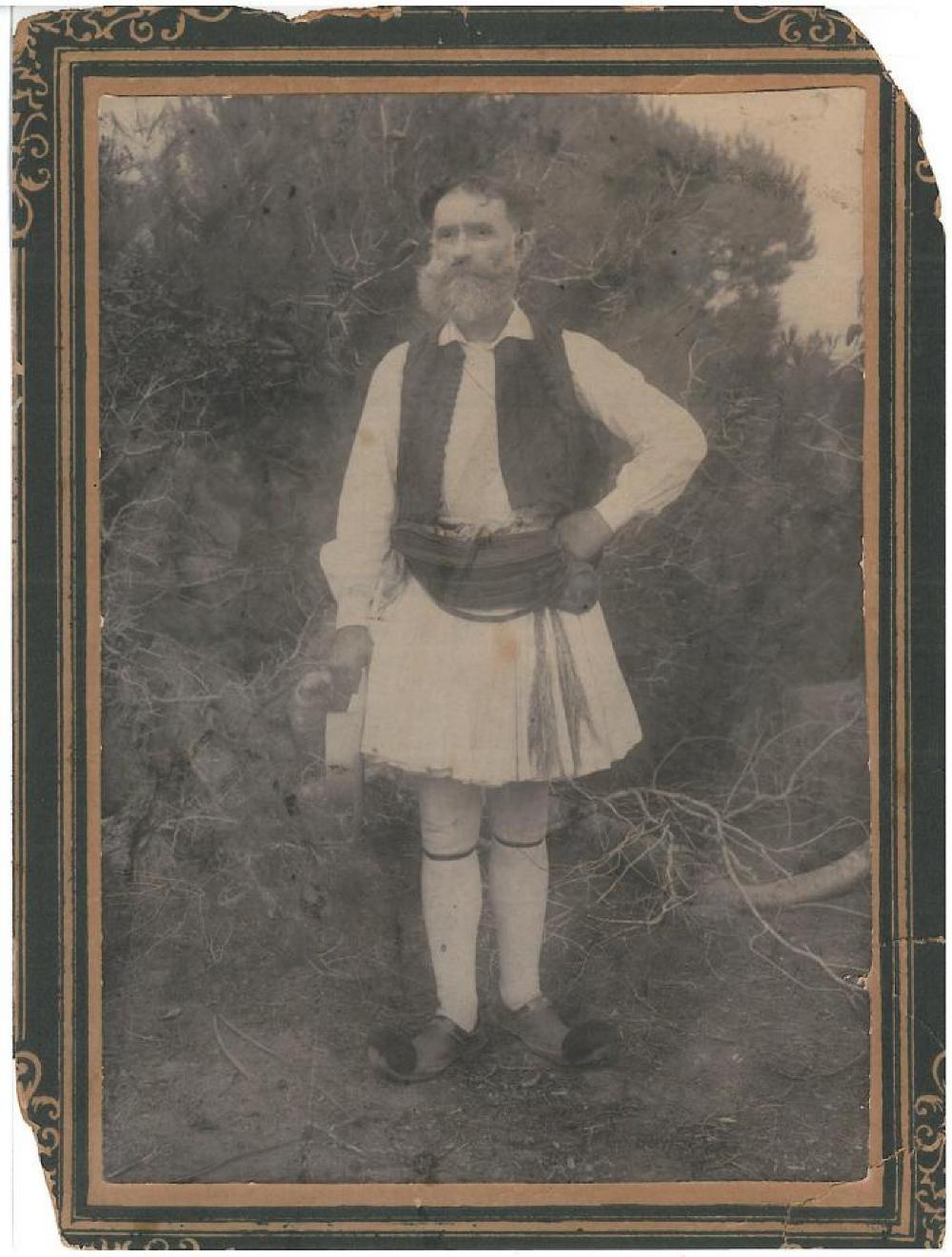 This photograph picutes George Kremidas (appx age 40) standing in the center of the frame with one hand on his hip. George is standing in front of a large, scraggly bush/tree. The landscape behind him George has a full beard and a long moustache that connect so that its resembles a large semi-circle of hair over the bottom half of his face. Flat brimmed hat in hand, he wears the ceremonial outfit which was donated in this accession. George wears the pleated shirt (ypodetes), waistcoat (phermeli), kilt (fustanella), and shoes (tsarouhia) thate are in out collection along with stockings and breeches/tights that are not. The phtot has a border of black and tan paper that is designed to replicate a decorative frame.

A note from the donors (George's grandchildren) tells us that this is a professionally reproduced photograph not the original. This outfit, worn by Mr. Kremidas from the time he was twenty until he was quite old (approximately 1880-1960), is mostly in our collection. While the ensemble is no longer everyday wear for most Greeks, it would have been common when George Kremidas was young. Today the Evzones (Presidential guard) wear this type of unform. The outfit traces it origins to the uniforms of the Klephts who fought the Ottman Turks in the War for Greek Indepedence. George Kremidas and his wife Despina lived in the Greek village of Dessila, Greece. Dessila is a tiny village in the area of Messenia on the Peloponnese. Their daughter Angeliki, the third of five children, was the only member of the immediate family to emmigrate to America. While living in New England, she married Nicholas Apostolos and subsequently gave birth to two sons: George and James. The family moved to Michigan and both sons served in the military during World War II. Afterwards both sons earned degrees from Worsham College of Mortuary Scieince in Chicago and opened a mortuary in Muskegon, Michigan together. James married Geraldine Pavlis. In 1960 the two left to visit his family in Greece, however, on the day of their departure George Kremidas (James' grandfather) passed away at the age of 98. The personal artifacts included in this accession were given to the Apostles during this trip.