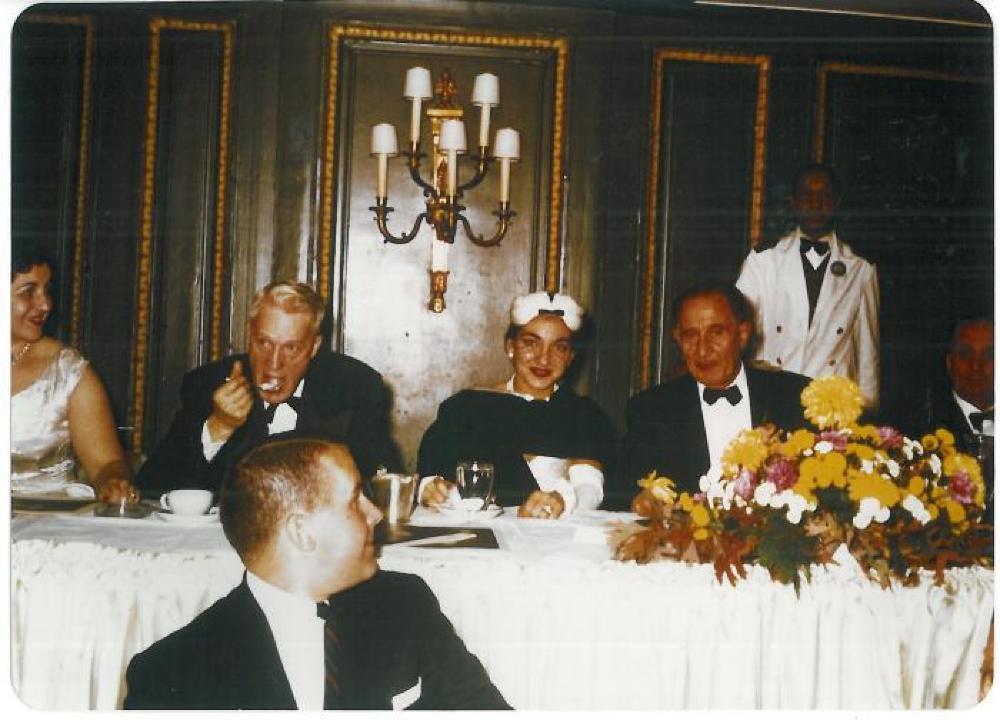 Color photograph focused on a couple at a wedding. The background is a wood paneled wall with a 5 candled wall fixture in the middle. To the right of that fixture stands a waiter, man, dressed in a white coat with a black vest and a black bow tie. He seems to have a name tag on as well. Seated are 5 people, 2 females and 2 males. The first female to the left is looking to her left, she wears a light colored metallic dress, the man to the right of her has white hair, and wears a tux. He is eating. The woman to the right of him is smiling for the camera. She has a headpiece that has white at the top, and a black bird cage over her face. She wears a back dress and white gloves. To the right of her is a man wearing a tux and also smiling for the camera. Another man is seated to the right of him, and seems to be looking at the camera, but is not meant to be photographed. All 5 people sit behind a white tableclothed table with dishes and a flower arrangement on it. In front of this table is another man. He appears to be younger, is wearing a black suit jacket, white shirt, and blue and red tie. He is looking behind him, seemingly at the couple that is posing for the camera. On the back of the photograph is a blue stamp of the text, "This is a Chrome Enlargement made by ___stman Kodak Company, ___ Regis, U.S. Pat. Off." There is also a pink post-it note that reads, "Maria Callas (contor)(?), Judge James K. Chelos (Right).

Maria Callas, an opera performer, was born to Greek emmigrant parents in New York, NY. In 1923. She was born as Anna Maria Sofia Cecilia Kalogeropoulo, but her father opened a pharmacy and changed their name to Callas, in order to be more managable. Her parents separated while she was 14, and at that moment, she moved back to Athens with her mother and her sister. Once she was there, she began music schools and performing. She returned to the United States before the war, but returned to Europe after the war where she met her first husband, Giovanni Batista. He took control over her career, and she thrived within just a few decades. She then met Aristotle Onassis through her husband, and soon began to have a long time affair with him. She began to have vocal problems, and her marriage dissolved because of her side relationship with Aristotle Onassis. But Callas seemed to be ok, because she still continued her singing career, and expected herself to be married to Onassis soon. In 1968, though, Onassis decided to marry Jackie Kennedy instead of Maria Callas, and it was said that she never fully healed from that heartbreak. She soon lost her voice entirely, and began to have issues with being addicted to sleeping pills. Maria Callas died of a heart attack in her Paris residence in 1977 at the age of 53.