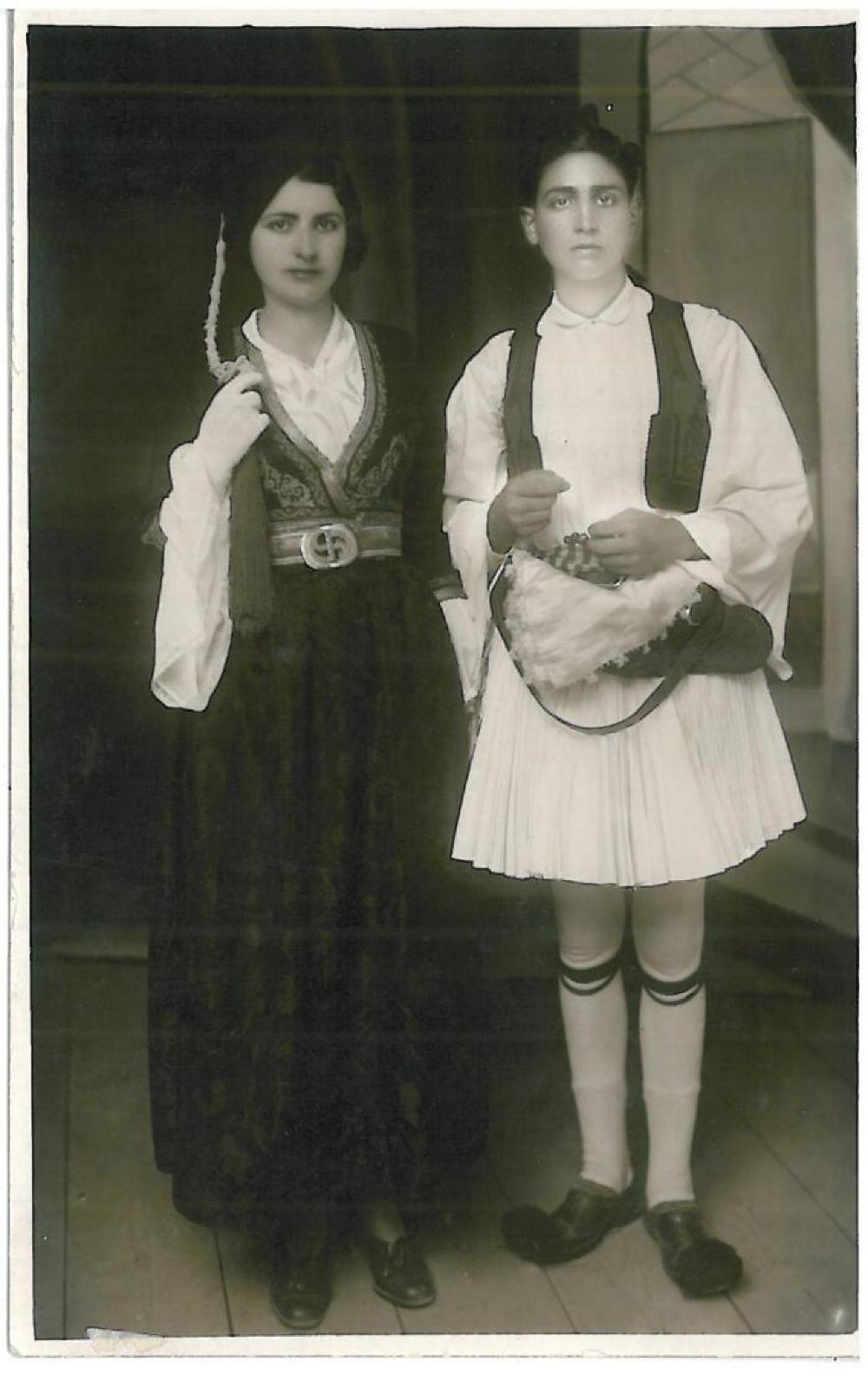 A black and white portrait of a young man and woman in traditional Greek costume. The boy is wearig a white shirt, a white pleated skirt, and a blcack vest. He is wearing a belt which has room for storage on it. He is wearing white stockings with black bands below his knees. He is wearing black shoes with pompoms on the end. The girl is wearing a long black, patterned skirt, with a white shirts, a black embroided vest, and a headpiece with a large tassel hanging on it. The girl has her left hand, which is gloved holding the tassel. The bot is holding something in his hands in front of him. They are standing on a wood floor, with a backdrop of a room behind them.

Aristotle T. Flessor donated photographs of his family from Greece. This photo is of two unidentified Greek teenagers, taken in Tripoli, Greece, in 1935. They are wearing traditional Greek costume. Foustanella/Tsolias were worn by diplomats and warriors, this costume was declared the national costume for men; it is found in mountainous areas and was worn mainly in the Central and Southern parts of Greece. The costume derives its name from the pleated white skirt (Foustanella) made by triangular shaped pieces of cloth called "langolia" which are sewn together diagonally. The Foustanella skirt consists of 400 pleats symbolizing the years during which Greece was under Ottoman rule. The Greek Fighters of the 1821 revolution wore the Foustanella while fighting the Turks. Today it serves as the official uniform of the Evzones, the Presidential Guard, who keep their vigil at the Tomb of the Unknown Soldier in Athens. The remainder of the costume is composed of a white shirt with a very wide flowing sleeve, and embroidered woolen vest called the "fermeli" and has panels hanging from the back. The vest can be blue, black or maroon, the latter worn by the captain of the guard. A sash is worn around the waist, and pointed shoes which have large pompons known as Tsarouhia which were worn for mountain climbing. Karagouna The Karagouna is the famous female costume from Thessaly in Central Greece. The Karagouna costume is a wedding dress with bright colors symbolizing the wealth of the valley of Thessaly. The name came out of the way the women could move only their heads because of the weight of the costume and their jewelry. This costume consists of an undergarment which is a white dress with a thick black fringe edge, a wool coat with handmade tufts at the edges of sleeves and embroidery at the hemline, a white sleeveless coat ''sayias'' with decorated trim, a short red wool felt richly embroidered waistcoat, and velvet arm bands with black or multicolored fringe. Worn around the waist is a red felt apron with bands of embroidered gold thread and finally the black embroidered head kerchief scarf wrapped and then twisted around the head and decorated with gold coins across the forehead. Distinctive features of this costume, symbolizing the wealth of the bride, are the many rows of chains of coins that are worn across the bosom. The apron is also decorated with a brooch and silver or gold chain piece.