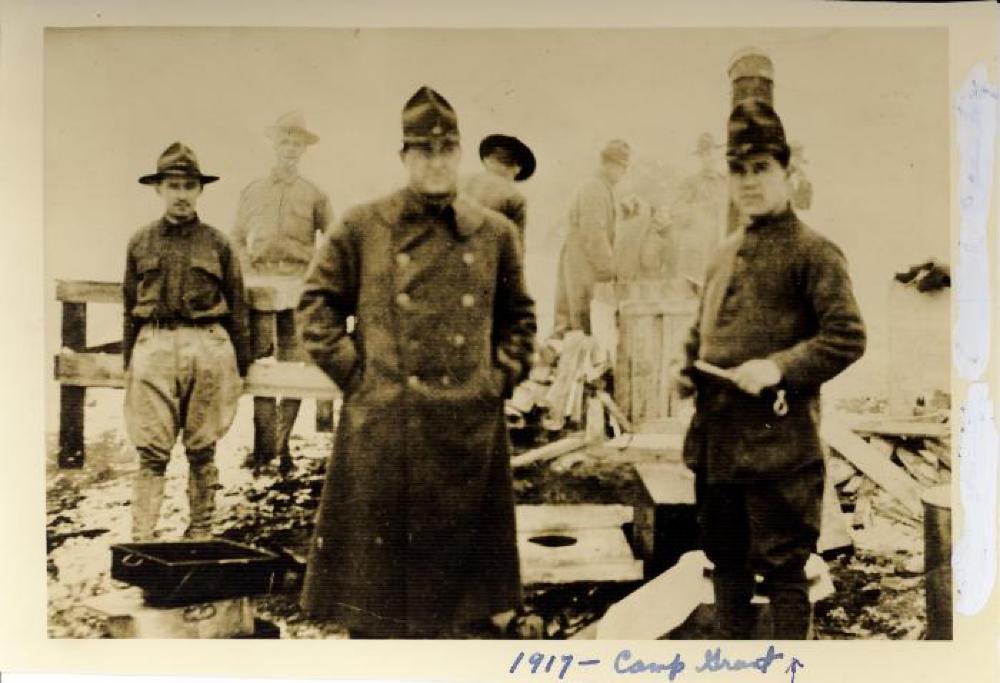 Florence's Collection (is part of)

Dasaky, Florence (is related to)
Studios, Radium (created by)

Image of Private John Dasaky, member of the 33rd division, at right, serving in the US Army in 1917 at Camp Grant, Rockford, IL. Three other soliders face the photographer while additional soliders are seen working in background. All individuals dressed in WWI military attire.

Donated by Florence Dasaky. The 33rd division regiment was sent oversees and John Dasaky saw action in France during WWI. He was honorably discharged in 1919. Established in 1917, Camp Grant saw its first "selected men" or draftees arrive in September of that year. Primarily a location for training infantry, it became one of the largest military training facilities during World War I. The 86th Infantry Division (Black Hawk Division) was formed there. Men of the 86th, after their initial training were sent to other units. While never serving as a division in combat during World War One, elements saw combat. One regiment, the 332nd Infantry, saw service in Italy. The 172nd Infantry Brigade was organized at Camp Grant. It is worth noting that in 1918 the Spanish Influenza Pandemic affected over 4,000, taking the lives of over 1,000 soldiers at Camp Grant between the 23rd of September and the 1st of October. Camp Grant was closed as a U.S. Army facility by December 1923, but in January, 1924, was turned over to the Illinois National Guard. The inter-war period also saw Camp Grant used by the Civilian Conservation Corps between 1933 and 1935.