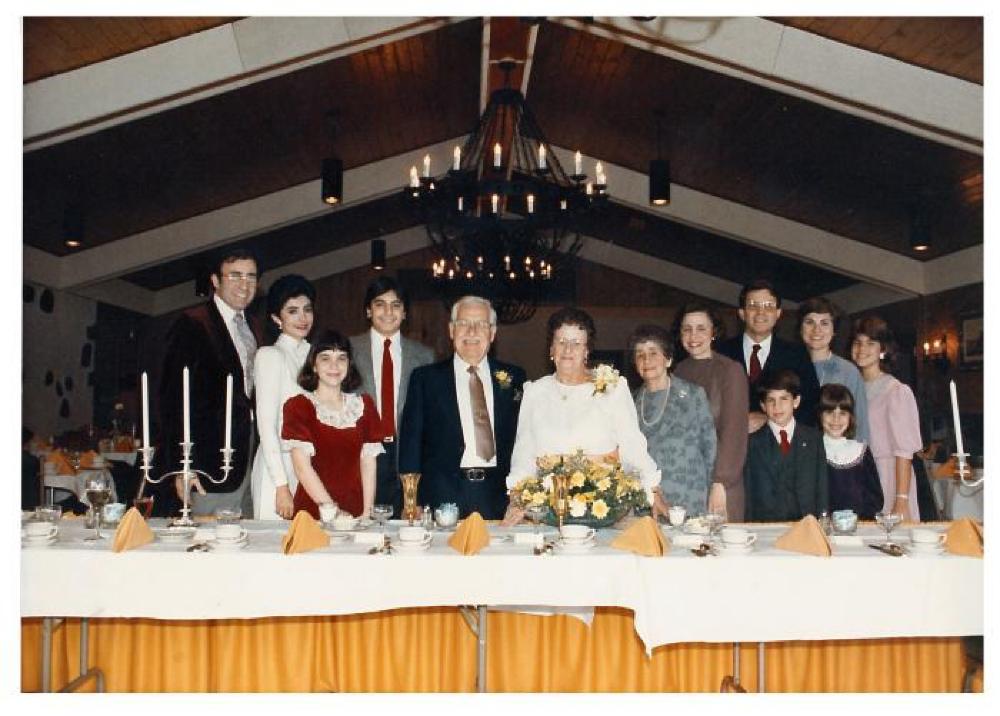 Pagedas Family Collection (is part of)

A color picture of a group of people standing behind a long table. In the middle is an elderly couple. He is wearing a dark suit and light tie, as well as a yellow boutonniere. She is wearing a white blouse with a gold necklace and earrings and a small bouquet of flower at her shoulder. He has white hair and a white mustache, while she has dark, curly hair. Both of them are wearing glasses. To the left of the couple are two adults and two children, all of whom have dark hair. The man is also wearing glasses. To the right of the elderly couple is another elderly woman, as well as two other women, a man, and three children. Everyone in the picture is dressed nicely, with the women and girls wearing skirts or dresses and the men wearing suits and ties. The table that they are standing has a dark yellow cover draped over the side that faces the rest of the room (the side on which they are standing). On top of the table is a white table cloth, as well as place setting and yellow napkins. A pair of candelabra and a large bouquet of flowers also sit on the table. Other, smaller tables can be seen behind the people. The room in which they are standing has an angled ceiling, and there are several black chandeliers hanging from the middle, as well as a number of smaller light fixtures along the sides.

This photo is from the 50th wedding anniversary of Peter and Anna Sarantos. The Sarantoses were originally married in Gary, Indiana on November 10, 1935. According to the invitation, their anniversary party was held in Elm Grove, Wisconsin on November 10, 1985. In this photograph, the couple in the middle is Peter and Anna Sarantos, and the people with them are likely members of their family.