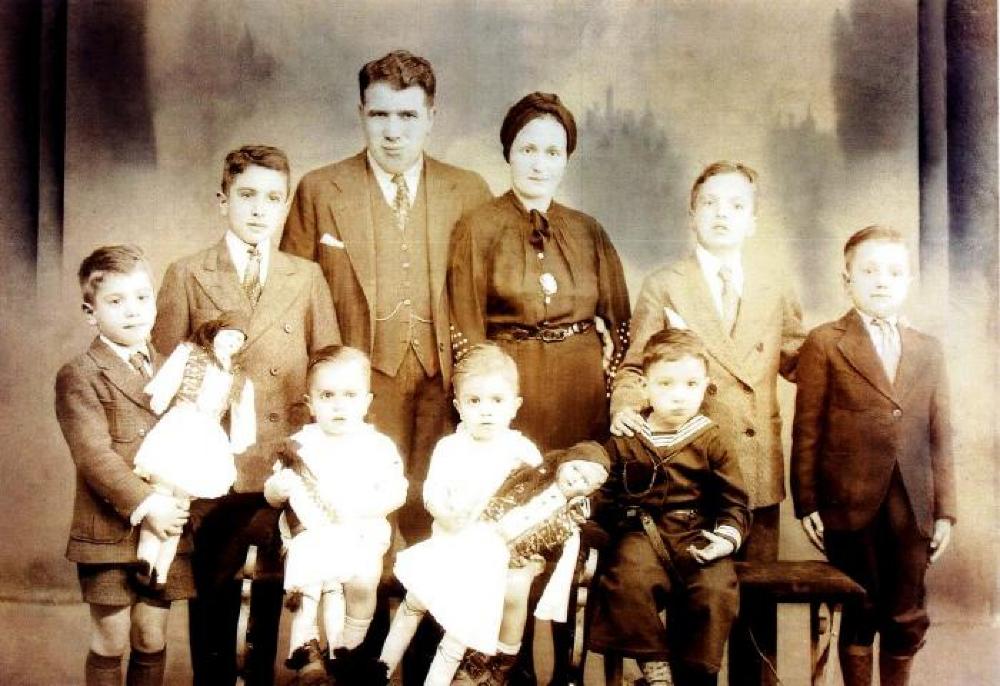 Formal portrait of Spanakos family. The two adults, Micheal and Stella, are in the back row in the middle with two boys on one side and one on the other. In the front row there is three young children sitting on a bench, two are twins and they are dressed in the white and holding dolls. The other one sitting is in darker clothing and the opposite side of him in the front row is another brother who is standing and holding a doll. The photo has an antique color and with the words in white on the bottom that say "Spanakos Family Circa 1940." The woman, Stella, has a dark colored wrap around her hair and is wearing a dark colored dress with stars on the bottom part of the sleaves, a belt, and a large broach or buttom on the top. The father, Michael, and the three tallest boys are wearing suits with ties. The boy standing in the front has a suit on with shorts and tall socks while holding a doll that is in a white outfit with a darker vest and a head piece. The twins in front are wearing white shirt and shorts while holding a doll like the other brother had. The third boy sitting on the bench is wearing a sailor-like outfit. See 2009.1.7.1

Michael and Stella Spanakos came through Ellis Island and lived in Brooklyn, Michael came over in 1912 at the age of 16 and Stella came over in 1908 at the age of 6. They got married in 1927. In 1962 Stella was awarded New York State Mother of the Year by the Governor Nelson Rockefeller. That same year she was runner up for the National Mother of the Year. In 1964 the US Senator Kenneth Keating honored her as the USA Greek American mother of the year. In 1964 she led the Greek Independence Day Parade and the whole family was featured in a documentary called 'The American Story.' Their oldest son, Bill, graduated from Law School in 1953 and has an office with the third oldest son, John, in Bay Ridge. The fifth son, George, practices law with his two daugters in Brooklyn. The twins, Petros and Nikos, were born in 1938 and graduated from Fort Hamilton High School in 1956 then in 1960 from the College of Idaho on boxing scholarships. From 1952-1964 they won over 35 boxing titles, Petros was the Golden Gloves champion ten times in a row and Nikos won seven Golden Glvoes championships. In 1959 Petros won a bronze medal in the Pan-American Games and in 1960 Nikos was on Rome's Olympics team. In 1960 the twins and Cassius Clay, who is now Muhammad Ali, won the Western Golden Gloves at Soldier Field in Chicago and each won the 'Outstanding Fighter' trophy in their own weight class. The three also won the National Golden Gloves in 1960. In 1965 Petros graduated from a New York Law School and went on to spend most of his career as a counsler in the New York City Board of Education. Nikos has a Doctorate in Buisness Administrations and taught in the State University of New York system. The twins were inducted to the Hall of Fame at their high school, College of Idaho, and the Greek-American fraternal order A.H.E.P.A.