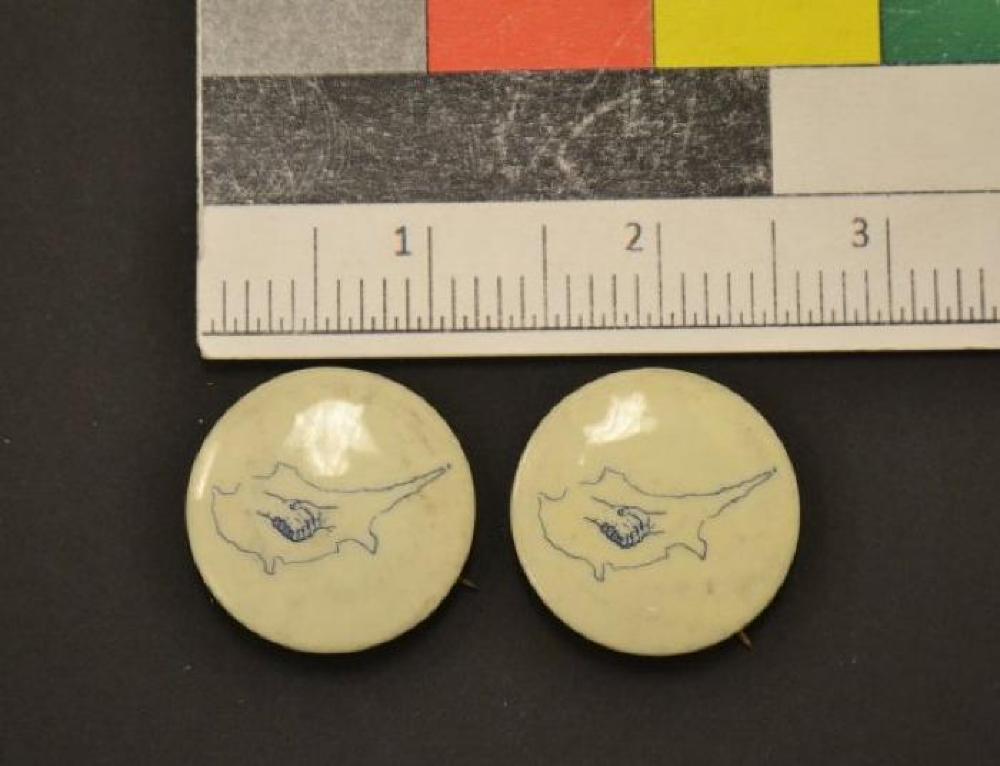 The button is round and off-white. there is a simple design in the center in blue in the shape of the outline of the island of Cyprus. in the center of that, in the same fashion, is the image of two hands hand-shaking. On the back of hte pin ans a logo in the center in an oval. At the top of he oval there are words printed into the tin that read "LOCAL 115". INside the oval at one end says "UNION" the other says "LABEL". in the center there is a 7 pronged design in a * shape.

The island of Cyprus lies just off the coast of Southern Turkey and to the west of Syria and Lebanon in the Mediterranean Sea and has been the subject of dispute between Greeks and Turks. In it's history, Cyprus has been prey to numerous invasions and raids; having changed hands Ottoman, French and Venician rule, as well as other raids. ON August 16,1960, Cyprus won it's freedom from the British crown. After that, Greek Cypriots were pushing to make a union with Greece while Turkish Cypriots refused. This effort was referred to as enosis, which means unity. It had great support from the Greek Cypriots, which were about 80% of the population of Cyprus at the time the Turks boycotted it however. The Greek EOKA was formed which was an armed group that sued for a union with Cyprus and Greek, in response, the Turkish TMT was formed; a resistance organization to counter EOKA. In 1974 a coup d'etat was carried out by the Greek Junta which ousted Makarios III from presidency. The Turkish Cypriots inturn began invading the island of Cyprus. A cease-fire was reached that same year with the Turks occupying 37% of the island and 180,000 Greeks being evicted from their homes and about 50,000 Turks moved into place. The island divided into two territories with Greek Cypriots in the south and Turkish Cypriots in the north. The northern territory was proclaimed "The Turkish Republic of Northern Cyprus" by it's leader, but is not recognized outside of Turkey as it's own entity. This invasion is said to violate the Geneva Convention and some UN resolutions. In March 2008 a wall that had stood as a UN buffer zone was opened at Leda street in Nicosia. The island though remains split and so far there has been no agreed upon resolution to the tensions. The Island of Cyprus as a whole joined the EU on May 1, 2004, however, EU legislation is suspended in the Turkish territory of the island.