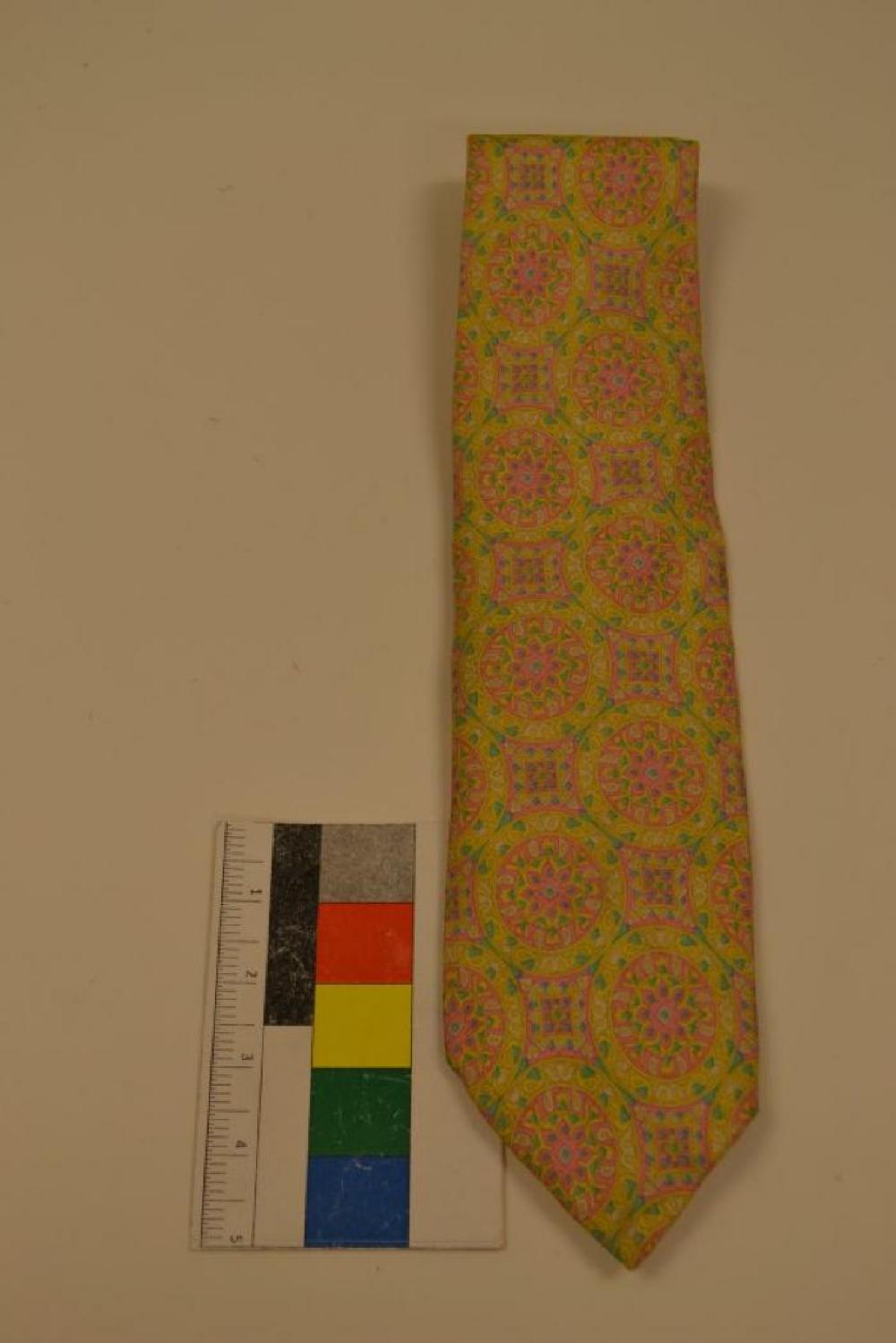 Bacil, Constantine (is related to)

Yellow, pink and mint tie. Geometric pattern that covers the whole tie. There are two sets of designs that sit next to each other and fill the tie. The first is a large circle with three smaller ones inside. The first layer is yellow with a white design working its was around. The middle layer is pink with yellow a white tear drop shapes images within it. The center is green, pink and yellow and is an eight peddled flower: pink as a whole with green diamond shapes on the middle and a yellow diamond in the center. The other patter that sits next to the circle floral one is also pink, yellow, and green. The pink is the background for the main design. The edge portion is in yellow and within the stairs there are small green points. The very center square is pink with six small green dots. The back side of the tie also has those two patterns all over it, but also has a seem going through the middle. Towards the bottom is a black tag that says "Sears. The Men's Store" and on the point of the tie is another tag that reads "100% silk RN 16484".

Sears, Roebuck & Company is an American multinational department store chain[2] headquartered in Hoffman Estates, Illinois, in Greater Chicago. The company was founded by Richard Warren Sears and Alvah Curtis Roebuck in 1893 as a mail order catalog. Julius Rosenwald took control in 1895 and expanded its sales and profits greatly. In 1925, it began opening local department stores. The business peaked in the 1950s and 1960s, then began a long, slow contraction. In 2005, it was bought out by Kmart, which renamed itself Sears Holdings. In 1973, it opened a new headquarters in the Sears Tower, a 108-story, 1,451-foot (442 m) skyscraper that was the tallest building in the world until 1998. Until October 1989, Sears was America's largest retailer, when it was surpassed by Walmart in domestic revenue. Target, Best Buy, and Home Depot have also surpassed Sears since. As of 2012, it is the fourth-largest U.S. department store company by retail sales and is the 12th-largest retailer in the United States, leading its competitor Macy's in 2013 in terms of revenue