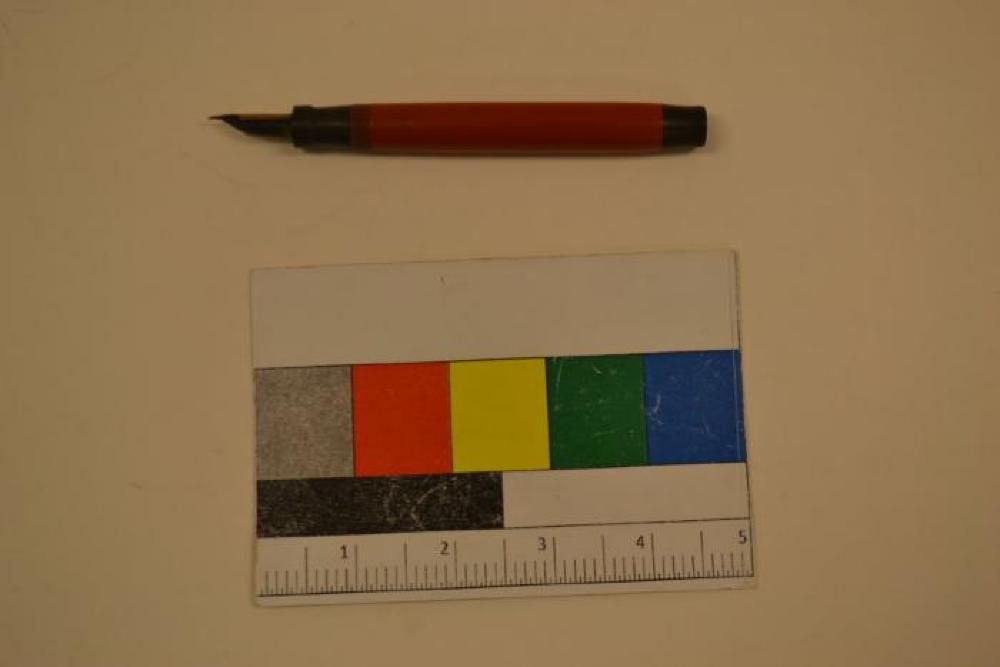 George and Spiros Papachristos immigrated to the U.S. from Greece in 1912 at the age of 16 or 17. They went back to Greece in the late 1930's. After WWII they moved to Utah. After living in Utah they moved to Chicago. According to the donor, this pen was owned by Spiros. The Parker Duofold is a range of fountain pens produced by the Parker Pen Company. The first model was produced in 1921 and was a large pen, 5.5 inches long when capped, and made of a showy bright red hard rubber and expensively priced at $7.00. The original full-sized Duofold was soon joined by the smaller Duofold Junior, Duofold Special, and Lady Duofold. While the Junior and special could also be fitted with Parker’s Washer Clip, the Lady Duofold was available with a Chatelaine, or Ring Top for hanging around one's neck. The Ring Top would also appear on Parker's Vest Pocket models, for being attached to a watch fob. Matching pencils would come with either clip or ring, depending on the pen selected. The pen was available only in black and red hard rubber until 1926, when Parker introduced the unbreakable Permanite” Duofold (Permanite was Parker’s trade name for a plastic manufactured by DuPont). The first new hue was the now traditional red, followed by Jade green which was not originally referred to as a Duofold, but rather the Black Tipped Jade. This was followed by Lapis Lazuli blue and Mandarin Yellow. In 1928, Moderne black and pearl (black lined pearl) was introduced as a Deluxe model and Parker signified this by the addition of a third cap ring to the cap band instead of the usual two found at the time. In 1930 the Duofold line was streamlined with tapered ends replacing the familiar “flat-top” style. Additional varieties were introduced: burgundy (red and black pearl); Moderne green and pearl (green lined pearl); and finally, green and black pearl (black lined green pearl).